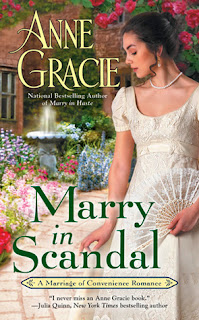 A shy heiress and a well-known rake face a scandal-forced marriage that might be true love in the latest irresistible romance from the national bestselling author of Marry in Haste.

Shy young heiress, Lady Lily Rutherford, is in no hurry to marry. She dreams of true love and a real courtship. But when disaster strikes, she finds herself facing a scandal-forced marriage to her rescuer, Edward Galbraith, a well known rake.

Despite his reputation Lily is drawn to the handsome Galbraith. In the gamble of her life, she agrees to marry him, hoping to turn a convenient marriage into a love match.

As heir to a title, Galbraith knows he must wed, so a convenient marriage suits him perfectly. But there is a darkness in his past, and secrets he refuses to share with his tender-hearted young bride. All Lily's efforts to get close to him fall on stony ground, and in desperation she retreats to his childhood home—the place he's avoided for nearly a decade.


Must Lily reconcile herself to a marriage without love? Or will Galbraith realize that this warm-hearted, loving girl is the key to healing the wounds of his past—and his heart?

If you read the first book in this series, Marry in Haste, you will be familiar with Lady Lily Rutherford. If not, this book will still be sure to captivate your attention as Lily's story is quite engaging. Lily isn't looking for marriage, but she certainly hopes for true love. Instead, she is not pleased to find herself facing marriage to Edward Galbraith, due to a scandal. It really is disturbing to her that he is a rake with quite a reputation.

At the tender age of 18, Lily is more than a bit naive. Lily must face one fact ... she is more than drawn to him. So agreeing to marry Edward might not end up being the worst thing that could happen to her. Now, if she could just get him to have feelings for her. However, Edward has had a difficult past, and does his very best to keep his heart under lock and key.

As far as how Lily and Edward got together. Well, he was her savior. After rescuing Lily, all he wanted to do was to keep her safe until he could return her to her family. Meanwhile, there was a man who put Lily in danger, and that is something that Edward will never forget. Although he is more than honorable, and despite the fact that he worked hard to maintain Lily's reputation, the pair do end up together.

One thing about Lily is that she has never been able to learn to read, and this is a huge part of who she is, and therefore, this becomes part of this story. Meanwhile, since this is part of a series, we see Lily's family occasionally. What's more is there is a special character who I was rather fond of, and that it Edward's grandfather. So, just as in the first book in series, family connections were part of this story.

I love how Lily's learning disorder was handled, and also enjoyed how Edward was able to face his past. This was a terrific read and a delightful part of an enjoyable series. The next book, Marry in Secret, was another very good read.

On the left is me in Greece with my good friend, Fay, in our village outfits. The film went a funny colour, but you get the idea. I’m the one in the pink apron. On the right, is me posing shamelessly on a glacier in New Zealand.
No matter where I lived, I read. I devoured whatever I could get my hands on — old Enid Blyton and Mary Grant Bruce books, old schoolboys annuals. I learned history by reading Rosemary Sutcliffe, Henry Treece and Georgette Heyer. I loved animal books — Elyne Mitchell’s Silver Brumby books and Mary Patchett and Finn the Wolf Hound. And then I read Jane Austen and Dickens and Mary Stewart and Richard Llewellyn and Virginia Woolf and EF Benson and Dick Francis and David Malouf and Patrick White and Doris Lessing and PD James and…the list is never ending.