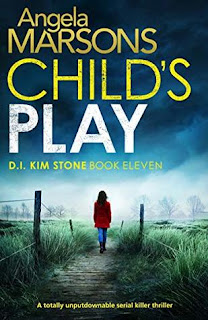 Finally we’re playing a game. A game that I have chosen. I give one last push of the roundabout and stand back. 'You really should have played with me,’ I tell her again although I know she can no longer hear.

Late one summer evening, Detective Kim Stone arrives at Haden Hill Park to the scene of a horrific crime: a woman in her sixties tied to a swing with barbed wire and an X carved into the back of her neck.

The victim, Belinda Evans, was a retired college Professor of Child Psychology. As Kim and her team search her home, they find an overnight bag packed and begin to unravel a complex relationship between Belinda and her sister Veronica.

Then two more bodies are found bearing the same distinctive markings, and Kim knows she is on the hunt for a ritualistic serial killer. Linking the victims, Kim discovers they were involved in annual tournaments for gifted children and were on their way to the next event.

With DS Penn immersed in the murder case of a young man, Kim and her team are already stretched and up against one of the most ruthless killer’s they’ve ever encountered. The clues lie in investigating every child who attended the tournaments, dating back decades.

Faced with hundreds of potential leads and a bereaved sister who is refusing to talk, can Kim get inside the mind of a killer and stop another murder before it’s too late?

The addictive new crime thriller from multi-million copy, number one bestseller Angela Marsons explores the dark side of child prodigies and will have you absolutely hooked.
Link to purchase the book

Detective Kim Stone is rather disturbed when she happens upon the latest murder scene. This time it is a 60ish woman found tied to a chair with an X carved into the back of her neck. The woman's name was Belinda Evans, and when her sister Veronica arrives, Kim hopes that she can begin to find answers. However, two more bodies are found, in a similar fashion.

As the title hints, it has something to do with children. Oddly enough, it is even more so related to the fact that the victims are all involved in child psychology. Currently, there are tournaments involving gifted children. How could people that work with children end up murder victims?

Meanwhile, one of Kim's team members, Penn, is determined to find the killer of a young man, so this leaves Kim short of help at times. So, with numerous suspects and an unending collection of clues, Kim really has her hands full. With the three murders so far, Kim works as fast as possible to prevent any future victims.

Child's Play is the 11th book in the D. I. Kim Stone series. I started with the 8th title and am more than impressed with Angela Marsons' writing style. The cases are intense and the twists and turns that come along are more than enough to keep any serious mystery reader captivated.

The series is going strong, and I really enjoy Kim. As a matter of fact, I really loved the previous title, Dead Memories, and I found this read to be even more intense. One thing that stood out for me in this book is seeing how Penn is blending in with the team. As the newest member, he was not welcomed at first (I am referring to book 9, Fatal Promise). He is doing better, but has been called back to his previous precinct to further investigate the murder of the aforementioned young man.

Each book in the series does deal with new crimes, so this could do well a a standalone. However, when reading police procedural novels, or crime thrillers, I often love the teamwork that I see. When you have a new team member, like Penn, it makes the family-type environment prove its worth. Because I read so many of these, this is very important to me. I cannot help but think of some television dramas I watch on Network TV, because that is exactly what this book and series reminds me of. I cannot wait to see what else is in store for Kim.