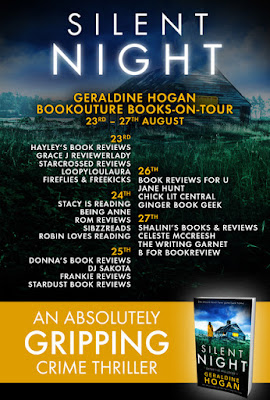 Today is my stop on the Blog Tour for Silent Night by Geraldine Hogan.

‘She reached into the pram and placed her hands on the cotton blanket. It was still warm. But her smiling, new baby sister, with her wide blue-grey eyes, was gone...’

Twenty five years later, three bodies are found at a ramshackle cottage in the Irish countryside, and Detective Iris Locke is sick to her stomach. The victims are Anna Crowe and her two young children.

Iris has only recently joined the Limerick Murder Squad. Against her father’s advice, she’s working the narrow lanes and green hills of her childhood. Iris still remembers Anna, who was just a small girl when her baby sister was snatched, never to be seen again. It was the one case Iris’ own father never solved, and Iris can’t help but wonder if the two crimes are connected.

She’ll stop at nothing to find Anna justice, but a fire has destroyed almost all the physical evidence, and Limerick is the same small town she remembers: everybody protects their neighbours, and Iris has been away for too long.

Can Iris unpick the lies beneath the surface of her pretty hometown, and catch the most twisted individual of her career, when reopening the old case means reopening old wounds for her team, the rest of the community, and her own father?

Fans of Patricia Gibney, Angela Marsons and L.J. Ross won’t want to miss this – the first book in a gripping and unputdownable new crime series. 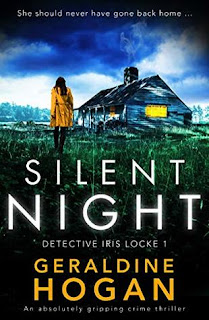 Detective Iris Locke is now a detective in her hometown of Limerick, despite her father's reticence. As a detective on the force for over 40 years, Jack Locke is worried for his daughter.  He doesn't want her to face anything like what he had to deal with during his career. When she approaches a horrifying crime scene, Iris is rather shocked to discover that she knew one of the victims, Anna Crowe.

Anna Crowe is a name Iris has heard many times before. She was related to a case that her father was never able to solve. That case involved her sister's disappearance from her pram decades ago. It soon seems more than likely that Anna's death definitely had something to do with what happened to her sister.

Iris is forced to dig deep, even bringing her father into the case, although he is long retired. This case begins to open up secrets and unlikely occurrences affecting people much too close to Iris. I loved the pacing of this book, and was rather shocked at some of the developments.

Silent Night is the first book in a new series. With such a harrowing case, Iris has proved her worth to her team, and no doubt, to readers of this series. I am addicted to series, especially ones related to mysteries and crime. I enjoy coming in at the start of this and really look forward to watching Iris excel as a detective. Reading books straight through is especially rewarding when they are written with the flair Geraldine Hogan possesses. 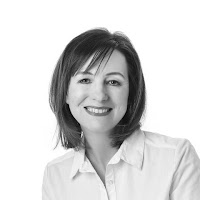