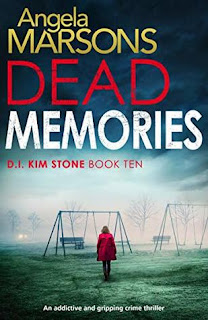 She ruined their lives. Now they’re going to destroy hers.

‘Someone is recreating every traumatic point in your life. They are doing this to make you suffer, to make you hurt and the only possible end game can be death. Your death.’

On the fourth floor of Chaucer House, two teenagers are found chained to a radiator. The boy is dead but the girl is alive. For Detective Kim Stone every detail of the scene mirrors her own terrifying experience with her brother Mikey, when they lived in the same tower block thirty years ago.

When the bodies of a middle-aged couple are discovered in a burnt-out car, Kim can’t ignore the chilling similarity to the deaths of Erica and Keith – the only loving parents Kim had ever known.

Faced with a killer who is recreating traumatic events from her past, Kim must face the brutal truth that someone wants to hurt her in the worst way possible. Desperate to stay on the case, she is forced to work with profiler Alison Lowe who has been called in to observe and monitor Kim’s behaviour.

Kim has spent years catching dangerous criminals and protecting the innocent. But with a killer firmly fixed on destroying Kim, can she solve this complex case and save her own life or will she become the final victim.
Link to purchase the book

There is a terrible scene about to face Detective Kim Stone. As she approaches, fellow officers try to block her entrance. The situation is that there are two teens chained to a radiator, and only one of them is alive. This scenario is chillingly similar to something Kim herself experienced with her brother Mikey thirty years before, in the very same neighborhood.

Then, another crime scene is drawn to her attention. This involves the bodies of a middle-aged couple found in a car that has burned. Well, this is how people Kim knew as her parents died. Kim knows for certain that these two crimes are connected. That is without a doubt. What Kim must ascertain, and rather quickly at that, is why this killer is recreating horrid experiences from her past.

While Kim begins her investigation, she enlists the aid of profiler Alison Lowe. Having her own team should be more than enough for Kim, but she is forced to depend on Alison's help. Will Kim get to the bottom of things before the killer finally turns his attention on her?

This fast-moving story was filled with twists and turns and had a heart-stopping conclusion. Dead Memories is the 10th book in the compelling D.I. Kim Stone series. This book, which could do well as a standalone, is a fine addition to the series. Readers, however, might want to take the time to read this excellent series from the very beginning, and then move on to book 11, as I did, which is Child's Play.