Review - A Duke Too Far 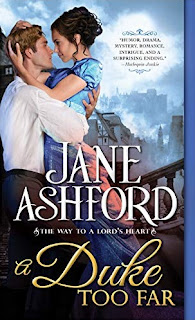 Secrets to reveal, legends to unravel, and a love to fight for...

Peter Rathbone, Duke of Compton, is already struggling to handle the responsibilities of his family home and his grief over his sister, Delia's death when he's astonished by an unexpected visitor. Life is about to get even more complicated.

Miss Ada Grandison is desperate to throw off haunting memories, and she's sure the duke can help her find answers to the questions her friend, Delia, left behind. She brings a note that Delia claimed would change everything for the Rathbone family. Peter can't quite bring himself to believe the legends he's heard all his life, but something about Ada inspires him to hope.

Both Peter Rathbone, Duke of Compton and Miss Ada Grandison are extremely saddened by the death of Delia, Peter's family. Delia was also Ada's closest friend. Ada approached Peter because she has possession of a note left to her by Delia that just might change the fate of the Rathbone family.

Both Peter and Ada are interesting in this book. Peter, despite his title, is all but destitute. Ava is plagued by nightmares. They soon discover that they are kindred spirits, especially as they are both mourning Delia. As Ada spends more time with Peter, getting to the bottom of the note that Ada  found is excellent common ground.

This note gives an air of mystery to this story, and has the potential of changing not only Peter's life, but Ada's as well. The romance was slow, very slow. This pleasant book is part of an enjoyable Regency romance series. The other books are Brave New Earl, A Lord Apart, and How to Cross a Marquess. The fifth book in this series is titled Earl's Well That Ends Well, set for release in December.

Jane has written historical and contemporary romances. Her books have been published in England, Spain, France, Italy, Sweden, Slovakia, Denmark, Russia, and Latvia Croatia and Slovenia as well as the U.S. She has been nominated for a Career Achievement Award by RT Book Reviews.