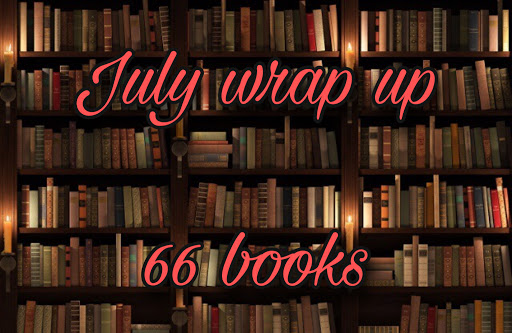 July proved to be an excellent reading month for me, despite me having more activities in my daily life. As I mentioned last month, I have become rather obsessed with the Nintendo Animal Crossing game. Meanwhile, I am thoroughly enjoying an active role in my youngest grandson's life. He is sixteen months old and my daughter recently moved back home. Also, I have begun cooking again. I have scoured Pinterest for easy but healthy and tasty recipes. As I am chronically ill and spend quite a bit of time in bed due to serious issues with pain, cooking once again brings me great joy.

This is how I rated all of them: 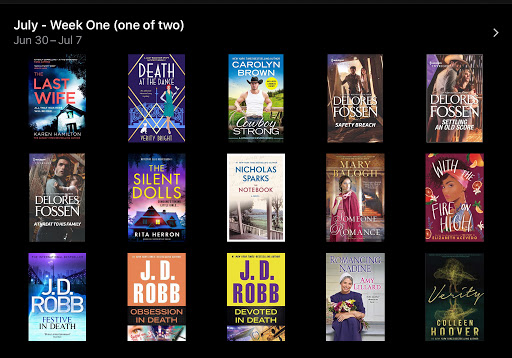 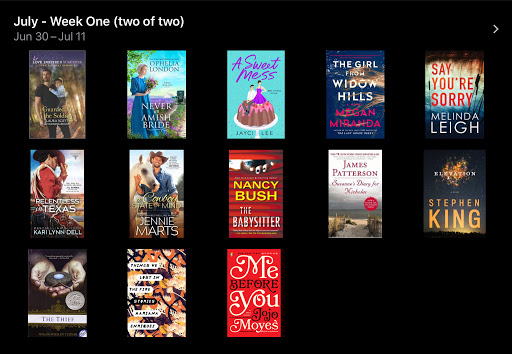 Format:
Audio - 12
eBook - 16
June ended up on a good note, but the last got to be a bit slow due to some issues I was experiencing. I quickly bounced back in the first week of July, although there was no way to keep up that pace, lol.
Each month I join in several reading challenges here on Facebook. I participated in Reading Rivalry, The Booket List, Litwits and Literary Fight Club. As I found books to match the criteria for the month’s challenges, I was fortunate enough to grab many of them as audiobooks either from my own Audible library, as well as from my local library via Hoopla or Overdrive. As I am now a complete Animal Crossing addict on the Nintendo Switch, I was able to work on my progress in the game while enjoying some absolutely fantastic books.

Here are some highlights for this week, including Delores Fossen’s Safety Breach, A Threat to His Family and Settling an Old Score, which are the first three books in a terrific romantic suspense series. The Silent Dolls by Rita Herron is a chilling book in a new crime fiction series. I also enjoyed two wonderful Amish fiction stories with my favorite being Romancing Nadine by Amy Lillard. This was a sweet and tender romance between a couple in their sixties. I was able to also enjoy three cowboy romances, including Carolyn Brown’s seventh book in her Longhorn Canyon series, Cowboy Strong.

Three more J. D. Robb In Death books are bringing me far too close to catching up with this fabulous series. It is going to be quite difficult to be relegated just one book once or twice a year. Eve and Roarke are my absolute favorite couple in any series that I have read. Then, a few months ago, I downloaded Verity by Colleen Hoover and got to read it this past week. This is my first book by her and, although have read several books since I finished it, needless to say, my head is still spinning!

I had two enjoyable rereads, Nicholas Sparks’ The Notebook, and James Patterson’s Suzanne’s Diary for Nicholas. I enjoyed both just as much as I did the first time around. I am not a Stephen King fan by any stretch of the imagination, but I needed a book to match one of the criteria in one of the challenges and Elevation was recommended to me. I am pleased to say that it was definitely a terrific book. 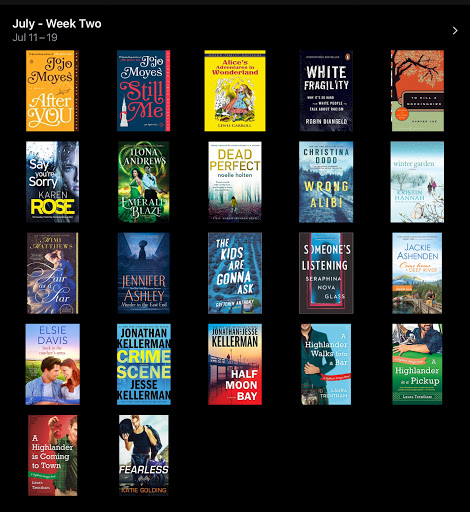 Format:
Audio - 7
eBook - 15
Two outstanding books were White Fragility - Why It’s So Hard for White People to Talk About Racism. The author is Robin DiAngelo. I got this book from Audible particularly so that I can listen to it again. The other outstanding book that I read was Winter Garden by Kristin Hannah. This book was for a buddy read in one of the monthly challenges that I participate in. We split the book into four sections and discussed each section after we finished. My partner gave the book 4 Stars and I gave it 5 stars. I was extremely touched by this book and I think Kristin Hannah is destined to be one of my favorite authors going forward.

Wrong Alibi by Christina Dodd was very eerie to me. There was an element in this book that put me on the edge of my seat and I would say please don’t read this at night. This won’t be out until December 29.

Last year I read A Measure of Darkness by Jonathan and Jesse Kellerman. It was the second book in the Clay Edison series. I got the third book for review, Half Moon Bay. So I went back into the series and got the first book which was called Crime Scene. Now I will be able to follow the series whenever the next book comes out. I enjoyed the character Clay in the series, whether it is his professional life or his personal life.

I also got Say No More by Karen Rose for review, so I downloaded the first book in the Sacramento series, Say You’re Sorry. I really enjoyed this book did read the second book in the series later on in the month. I also read and loved Emerald Blaze by Ilona Andrews, which, btw, Is a husband and wife author team. This is the fifth book in the Hidden Legacy urban fantasy series. 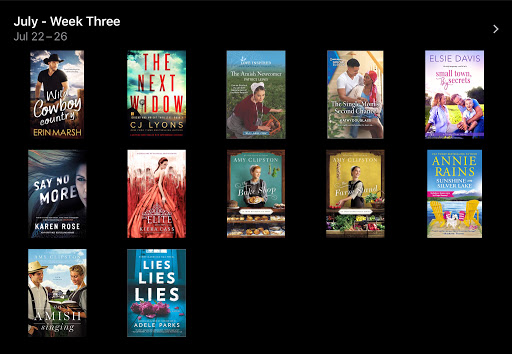 Format:
Audio - 3
eBook - 9
I had a very difficult week. I deal with physical and emotional health issues and at times my reading is affected. Although I only read twelve books this week, Highlights include Wild Cowboy Country by Erin Marsh which was a surprise to me. It was different because the story was about protecting baby wolves. Well, the lobos had points of view in the book. The Next Widow by C. J. Lyons was a really good read and and it was a really good start to a new series. This third week of July I had the pleasure of reading four Amish Fiction books. They are among my favorite types of read and it thrills me that there is so much out there already as well as new ones always popping up as review options.
I finally got a chance to read Say No More by Karen Rose. I downloaded it a few weeks ago, but then was requested to host a blog tour for this book, so I wanted to read the first book in the series, Say You're Sorry, which I had a chance to do the previous week. Say No More was much deeper to me than the first book in a series, as it dealt with a woman who once escaped a cult but is now being hunted down by one of them years later.
Last month I read The Selection by Kiera Cass and I knew I wanted to read the entire series, so this week of July I read the second one, The Elite. It is NA (New Adult), a genre I don't often read, but I really am loving the series so far.
The whopper of the week - perhaps the entire month of July - was Lies, Lies, Lies by Adele Parks. This book flipped me upside down! As I mentioned in my book review, I so so SO wanted to hate Simon the husband. After all, the book was about LIES but in reading it we learn who was lying and why. I loved the way the author spun this tale and I will be thinking about this book for a long while.

Format:
Audio - 2
Ebook - 5
This last week of July was definitely much shorter for me because I decided to create a spreadsheet of my backlog of book reviews that I need to write and post on my blog. I have a goal of 4 to 6 reviews per day which takes time away from reading. I haven’t quite met my goal so far, but I have gotten about a dozen written.

I had a reread this week. Deadlock by Catherine Coulter. I reread this for two reasons: I absolutely love this series (and love rereading some of the books) and when I realized I didn’t get the review written before the publication date I jumped on the fact that I could grab it from Audible. Actually, even though I get this series as eARCs, I love to keep them as part of my permanent library.

What You Wish For by Katherine Center was a meh read. It is noted to be women’s fiction, but it read young adult from beginning to end. I am not as favorable to that genre as many are so I had a hard time with the female protagonist’s incredible immaturity. The New Girlfriend by Sheryl Browne was a very well-written psychological thriller, and the "girlfriend" of a character who died early in the book (Josh) was truly twisted. I really felt for his mother, Cassie, in this book, and also his stepfather, Adam.
The Friendship List by Susan Mallery was the touching story of two friends who eventually found love in their lives. One of them, Unity, was determined to help best friend Ellen step out of her comfort zone. She created a list of things for Ellen to do over the summer, and as things turned out, she did a few of those things on that bucket list. This was a really sensitive and memorable story.

Lastly, I had a few Harlequin books for upcoming blog tours, A Child On His Doorstep by Lee Tobin McClain, Marriage by Arrangement by Sophia Singh Sasson and An Amish Mother’s Secret Past by Jo Ann Brown. I really enjoyed all three, most notably the Amish Fiction title. 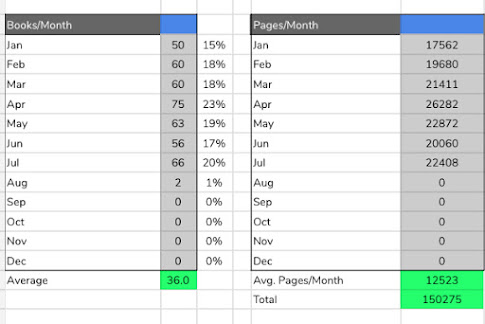 Here is my August TBR, including the books I have already started:
Currently Reading

That's it! As I will be continuing to work on my backlog of book reviews, with the goal of staying current, I may be reading less each week, but it will definitely be well worth it in the end.

Email ThisBlogThis!Share to TwitterShare to FacebookShare to Pinterest
Labels: monthly reading, wrap up