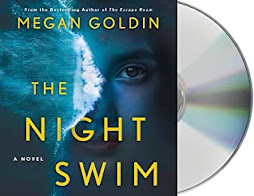 Title:  The Night Swim
Author:  Megan Goldin
Publisher:  Macmillan Audio
Genre:  Mystery/Thriller
Format:  Audiobook
Narrated by:  Bailey Carr, January LaVoy, Samantha Desz
No. of Pages:  352
Date of Publication:   August 4, 2020
My Rating: 5 Stars
DESCRIPTION:
After the first season of her true crime podcast became an overnight sensation and set an innocent man free, Rachel Krall is now a household name―and the last hope for thousands of people seeking justice. But she’s used to being recognized for her voice, not her face. Which makes it all the more unsettling when she finds a note on her car windshield, addressed to her, begging for help.

The small town of Neapolis is being torn apart by a devastating rape trial. The town’s golden boy, a swimmer destined for Olympic greatness, has been accused of raping a high school student, the beloved granddaughter of the police chief. Under pressure to make Season Three a success, Rachel throws herself into interviewing and investigating―but the mysterious letters keep showing up in unexpected places. Someone is following her, and she won’t stop until Rachel finds out what happened to her sister twenty-five years ago. Officially, Jenny Stills tragically drowned, but the letters insists she was murdered―and when Rachel starts asking questions, nobody seems to want to answer. The past and present start to collide as Rachel uncovers startling connections between the two cases that will change the course of the trial and the lives of everyone involved.

Electrifying and propulsive, The Night Swim asks: What is the price of a reputation? Can a small town ever right the wrongs of its past? And what really happened to Jenny?
Link to purchase the book
MY THOUGHTS:
Rachel Krall knows she has fans. Her podcast has been running for a year and has constantly gained popularity. When she gets a note on her car asking for help, she would rather ignore it. Actually, the sender said this is not her first contact with Rachel. No doubt someone in her staff wrote a polite denial letter. Well, that was not enough, thus the note on Rachel's car.
There is a huge rape trial going on in Rachel's town of Neapolis. The accused is a young man destined for the Olympics. The case is huge and could certainly derail the young man's career. His guilt or innocence is at constant battle for the vigilant lawyers involved. Meanwhile, Rachel continually reports on the progress of the case via her podcast, Guilty or Not Guilty. However, as things progress, Rachel begins having doubts and starts asking questions of her own. Also, there is a cold case of over twenty-five years that cost the life of her sister Jenny. Evidence was murky at best at that time and now that Rachel is digging, she begins to see similarities between the two cases.

When I read the ARC of this book I was intrigued. However, I received an audio ARC of this book and, even though only a month or so passed since my first read, I was just as captivated by the story. The fact that it was narrated by three individuals was wonderful, especially since one of the narrators is someone I have listened to quite frequently, January LaVoy. As far as I am concerned, a familiar voice really lends a lot to what is already a very good story.
The production was remarkable as well. The intro to each chapter was awesome, and the way the narrators handled all of the various characters could not have been done better. Then when you factor in the two storylines - which was done seamlessly - this was indeed an excellent book.
The matters at hand are certainly touchy. Rape and consent were explored and that most definitely had me feeling quite a bit of compassion towards the victims. As this was delivered quite a bit in podcast fashion, well, that was done really well. All in all, Megan Goldin presents a terrific book and I am so glad that I had the opportunity for a reread, via the audiobook program that NetGalley recently adopted.
Many thanks to Macmillan Audio, St. Martin's Press and to NetGalley for this ARC to review in exchange for my honest opinion.
ABOUT THE AUTHOR: 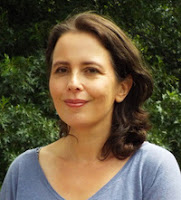