Audiobook Review - His & Hers 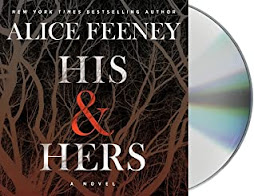 There are two sides to every story: yours and mine, ours and theirs, His & Hers. Which means someone is always lying.

Anna Andrews finally has what she wants. Almost. She’s worked hard to become the main TV presenter of the BBC’s lunchtime news, putting work before friends, family, and her now ex-husband. So, when someone threatens to take her dream job away, she’ll do almost anything to keep it.

When asked to cover a murder in Blackdown―the sleepy countryside village where she grew up―Anna is reluctant to go. But when the victim turns out to be one of her childhood friends, she can’t leave. It soon becomes clear that Anna isn’t just covering the story, she’s at the heart of it.

DCI Jack Harper left London for a reason, but never thought he’d end up working in a place like Blackdown. When the body of a young woman is discovered, Jack decides not to tell anyone that he knew the victim, until he begins to realise he is a suspect in his own murder investigation.

One of them knows more than they are letting on. Someone isn’t telling the truth. Alternating between Anna's and Jack's points of view, His & Hers is a fast-paced, complex, and dark puzzle that will keep readers guessing until the very end.
Link to purchase the book
MY THOUGHTS:
Anna Andrews has pretty much been replaced in her job as a presenter on a prime time TV news show. When a murder occurs in the countryside, Anna plans on outshining herself to prove her validity to the BBC station. However, this murder is far too close to her. The victim happens to be one of her friends from childhood. So, Anna goes much further than a simple quick report on her murder - pushing past every and any boundary in front of her. She wants to know what happens and will leave no stone unturned until she finds out what really happened.
When DCI Jack Harper sees Anna at the scene, he reacts much as she does when she spots him. They have a hot and tumultuous past between them. What is more is that Jack also knew the victim. What is going on and why is Jack suddenly a suspect in the murder? Some actual evidence, some circumstantial. That is what makes Jack's innocence harder and harder to believe as the case is investigated. Anna isn't flawless either. She has coped with some troubled times, including the loss of her baby and her battle with alcoholism. Why she is not as reliable as could be during the course of the investigation is slowly revealed.
As this was an audiobook, with a male and female narrator, I found this book to be utterly thrilling and pretty much impossible to stop. Every time I thought I would take a break, I figured just another 15 or 30 minutes. Before I knew it, I was closing in on an incredible ending in what was most definitely a thrilling story.

One thing that made this book so captivating was the rapid change of point of view, that of Anna and that of Jack. Even the killer had his own POV, in a chilling voice that Richard Armitage did flawlessly. As a true lover of audiobooks, it can be said that a narrator can make or break a book, no matter how good the story is. The narrators chosen for this book hit spot on.
Many thanks to Macmillan Audio and to NetGalley for this ARC for review.  This is my honest opinion.

Alice Feeney is an author and former BBC journalist. Her debut novel, Sometimes I Lie, was a New York Times and international bestseller. It has been translated into over twenty languages, and is being made into a TV series by Ellen DeGeneres and Warner Bros. starring Sarah Michelle Gellar.
Alice has lived in London and Sydney and has now settled in the Surrey countryside, where she lives with her husband and dog. His & Hers is being published around the world in 2020.
web | instagram | twitter | facebook