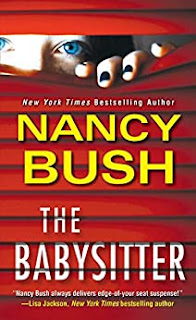 In River Glen, Oregon, rumors are spreading about the Babysitter Stalker. One victim was fatally stabbed. A second fell—or was pushed—from a rooftop deck. High school sophomore Jamie Whelon, scheduled to watch the Ryerson twins tonight, isn’t worried. She’s more interested in the party she’ll go to later, as soon as her sister Emma arrives to take over babysitting duties. But nothing goes according to plan . . .

Twenty years after that night’s vicious attack, Emma remains scarred in body and mind. Jamie, back in River Glen after their mother’s death, still feels guilty over trading places that fateful evening. Then suddenly another young babysitter is attacked. Jamie, with a teenage daughter of her own, fears something much more twisted than coincidence.

Is this new nightmare connected with those long-ago crimes? Emma’s fractured memories may contain the answer. But the deeper Jamie digs, the darker the secrets waiting to be uncovered—and avenged .

My days of babysitting were never like that! There was a "Babysitter Stalker" rumor for years. One girl was stabbed to death, another landed after a fall from rooftop deck. Even so, Jamie Whelon is excited to babysit a set of twins, especially since she was able to talk her sister Emma into doing it, so she could sneak off to a party. Well, twenty years later proves to the fact that Emma was indeed a victim of the stalker, and her scars, both inside and out, still plague her.

Jamie had left their hometown, but she is back and still has guilt after having Emma trade with her that fateful night. Their mother has recently died, so the sisters have to deal with that trauma. But, Jamie and her teenage daughter do step in to assist Emma since their mother is now gone. However, for some odd reason, the stalker strikes yet again and another girl is attacked. Why two decades apart? Are the event of the past and the present connected?

Jamie might have been a selfish teen who only wanted to party, but she is far from that now. She is now a responsible mother and a loving sister, and now determined to connect the dots between the past and the present.

What a thrilling story! Creepy for certain, with enough twists and turns to definitely keep me turning pages. I loved the way the book was written, from the drama, to the family issues, to the incredible tension that saturated the pages.

Many thanks to Zebra and to NetGalley for this ARC for review. This is my honest opinion.