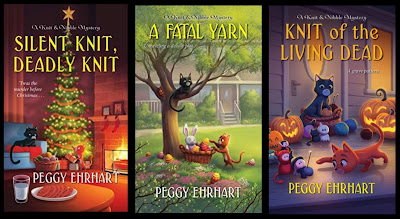 Previously I enjoyed the first three books in the Knit & Nibble series by Peggy Ehrhart. When I got the 5th and 6th book for review, I decided to read the 4th book and so all three reviews are in this blog post. 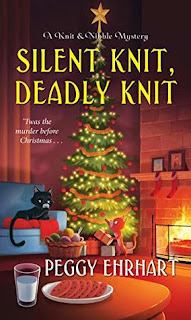 DESCRIPTION:
When murder silences the Christmas cheer in charming Arborville, New Jersey, Pamela and her Knit and Nibble pals must unravel the most bone-chilling mystery this side of the North Pole . . .
Pamela has been in merry spirits since her artsy daughter Penny returned home from college for the holidays. But their mother-daughter bonding time gets cut short when a terrified Penny stumbles upon the dumped body of Millicent Farthingale, a wealthy craft shop owner who was popular for all the wrong reasons. From a scheming business partner to a seedy husband several years her junior, Millicent attracted scammers so in love with her assets, they’d toss her down a chimney to get their paws on them. Now, with only a hand-knit red scarf connecting the killer to the crime, Pamela and the Knit and Nibblers could use some extra creativity as they find out who’s really naughty or nice in Arborville—because going up against a looming culprit is DIY or die!
Knitting tips and delicious recipe included!

The holidays are in full force and Pamela Paterson couldn't be happier when her daughter Penny heads home from college to celebrate. However, the atmosphere quickly changes when Penny finds a dead body, that of Millicent Farthingale, a sop owner. Millicent was someone that always had scandal attached to her name, but her death still manages to shock just about everyone, including Pamela and her Knit and Nibblers team.

Silent Knit, Deadly Knit is the delightful fourth book in the Knit and Nibble series. Whether you choose to read the series in order like I have chosen, or prefer to just grab one here or there, no worries, because each book has a single case that the team seek to solve. Of course, I enjoy continuity, so I was glad to get to this fourth story.

I have gotten to enjoy Pamela and her group of knitting friends. Solving murders is something that falls into their laps. Knitting is something that I have never learned, but I love this lovely group of people. This case is literally too close to home as Millicent was found dead in Pamela's house. How could she not get involved yet again? This is a quick story that is an excellent addition to the series. 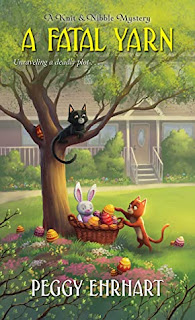 DESCRIPTION:
Pamela Paterson and her Knit and Nibble club must clear the name of one of their knitters when he's accused of murdering the mayor . . .
The trees in Arborville, New Jersey, have started sporting sweaters. Part of the trend of public knitting art? Not exactly. An anonymous activist has been wrapping trunks in yarn to cover red X's that mark certain trees for removal by the town so they don't interfere with power lines. When the town's mayor—who supports cutting down the trees—is murdered, Pamela wonders if the tree hugger committed homicide to prevent arborcide. A knitter is arrested, but it's one of Knit and Nibble's own—the harmless Rolland DeCamp, who was seen arguing with the mayor. Pamela is sure the police are barking up the wrong tree. With the help of her reporter friend Bettina, she branches off on her own investigation to root out the real killer . . .
Knitting tips and delicious recipe included!

After successfully solving several murders, the Knit & Knibble team are facing a real quandary. One of their own, Roland DeCamp has been accused of killing the mayor. Can Pamela Paterson and her team of avid knitters clear Roland's name?

Just like the other cozy mysteries I love to read, Pamela and her friends are amateur detectives. This doesn't slow them down in any way. With this being the fifth book in the series, I have gotten to know and love Pamela and her friends. To think one of them could have committed murder is all but unthinkable.

So, the task is on. Finding the real killer and keeping Roland out of jail. We do have extra players in this story - the trees that were to be cut down and have a close connection to the mayor's murder.

So, if you are loving this series as much as I am, then be sure to pick up A Fatal Yarn. You will definitely be in for a treat.

Many thanks to Kensington and to NetGalley for this ARC for review. This is my honest opinion. 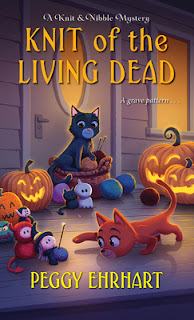 DESCRIPTION:
When a spooky celebration in Arborville, New Jersey conjures real scares, can Pamela and the Knit and Nibble Club sink their teeth into a bone-chilling mystery that just won't rest in peace?

Among the countless revelers at the town's much-anticipated Halloween parade, a woman dressed as Little Bo Peep is the only one making people scream bloody murder. In a scene straight out of a horror movie, the Knit and Nibblers find the nursery rhyme character dead with thick strands of yarn looped around her neck. Pamela and her best friend, Bettina, are set on pinning down who wanted the woman gone forever, but it'll take every trick they can muster to catch the culprit without becoming the next poor souls to join Little Bo Peep's dark, endless sleep . . .

The town of Arborville is setting things up for a Halloween parade. As per normal for Pamela Britton and her trusty team of amateur detectives, another mystery has fallen into their lap, and they will not rest without solving the crime.

They are all wearing costumes, but one is more deadly than any of the others. Because the woman in a Little Bo Peep costume is found murdered. Pamela and best friend Bettina do whatever they can to find the person responsible for the murder, and at the same time, remaining safe from harm.

I have loved this series from the very first book. Pamela and the group that make up the Knit & Nibble team are quite endearing. Cozy mysteries are always quite enjoyable, as there is always a murder to two to solve, all while things are kept rather sweet, making for easy reads. That is exactly how I felt about this book and the rest of the series.