SERIES REVIEW - SAY YOU'RE SORRY and SAY NO MORE 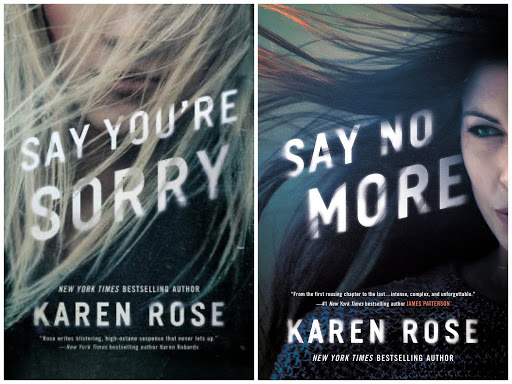 In this combined review, I will be reviewing the two books in Karen Rose's Sacramento series, Say You're Sorry and Say No More. 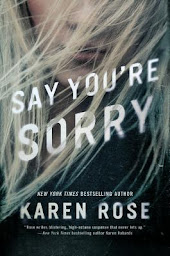 Title:  Say You're Sorry
Author:  Karen Rose
Series:  Sacramento #1
Publisher:  Berkley Books
Genre:   Mystery/Thriller; Romance
Format:  Audiobook
No. of Pages:   614
Date of Publication:   February 12, 2019
My Rating:   4 Stars
DESCRIPTION:
Introducing the first novel in the pulse-pounding Sacramento series from New York Times bestselling author Karen Rose.
There is a serial killer on the loose, preying on vulnerable women. The only identifiable mark the killer leaves are letters—sometimes one, sometimes two—all carved into the torsos of his victims. Together they spell “Sydney.”
When he grabs Daisy Dawson, he believes he has found his next victim. But despite her small stature, she fights back with an expertise that quickly frees her. Before fleeing the scene, Daisy also manages to grab what proves to be crucial evidence: a necklace from around the killer’s neck.
The necklace is more than a trivial item—it is a link to a cold case that Special Agent Gideon Reynolds has been tracking for seventeen years. With Daisy’s help, Gideon finally has the opportunity to get closer to the truth than ever before.
But they might not get the chance, as the serial killer has a new target: Gideon and Daisy.
Link to purchase the book
MY THOUGHTS:
There is a serial killer about and a clear pattern soon becomes more than apparent. Letters are left on the victims and eventually they spell a name: Sydney. The next victim, however, Daisy Dawson, manages to escape, and even manages to grab evidence that just might lead to the identity and capture of the brutal killer. Special Agent Gideon Reynolds is on the case. However, he is floored when the very thing that Daisy snatched is part of a cold case Gideon has been chasing for nearly two decades. The killer is not happy that he lost his prize, so Daisy remains a target.
In this pulse-pounding read by Karen Rose, the action and danger never let up for one second. While Gideon hits the ground running while readers get to know both Daisy and Gideon. Daisy made an immediate impression on me as she was strong enough to get away from a dangerous killer. She had a difficult past and coped with addiction. She is blessed to have a wonderful support dog that helps her, an adorable dog, albeit tiny, although named Brutus.
Gideon is flawed as his past has never left him, but his incredible strength and dedication shone through. What is impressive for me in writing this review is that I already read the second book in the series so I was able to understand Gideon's drive much better. The very thing that Daisy snatched was a locket. Well, this locket has a particular design, an exact replica of one that was once tattooed on Gideon's chest - during his time in a cult. In the second book in this Sacramento series, readers learn a lot more about that very cult.
What a strong start to what is most definitely an incredibly well-written and impressive series. Of course, this is also a romantic suspense, so quite naturally, Gideon and Daisy draw close, connected by the drama facing them and an ever growing emotional connection. I loved this book by Karen Rose, and although it had been awhile since I have read one of hers, I was more than eager to move onto the 2nd book in the series, Say No More. 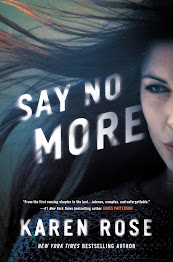 Title:  Say No More
Author:  Karen Rose
Series:  Sacramento #2
Publisher:  Berkley Books
Genre:   Mystery/Thriller; Romance
Format:  Kindle ARC
No. of Pages:   544
Date of Publication:   August 11, 2020
My Rating:   5 Stars
DESCRIPTION:
Mercy Callahan thought she'd escaped the cult decades ago, but its long fingers are reaching out for her again in this electrifying novel in the Sacramento series...
Seventeen years ago. That was the last time Mercy Callahan saw Ephraim Burton, the leader of the twisted Eden cult where she was raised. But even though she escaped the abuse and terror, they continue to haunt her.
When her brother Gideon discovers new evidence of the cult's—and their victims'—whereabouts, Mercy goes to Sacramento to reconnect with him. There, she meets Gideon's closest friend—homicide detective Rafe Sokolov. From Rafe, she receives an offer she never knew she needed: to track down Ephraim and make him pay for everything.
But Ephraim, who had thought Mercy long dead, discovers she is in fact alive and that she is digging around for the cult's secrets. And now he'll do anything to take her back to Eden—dead or alive. The tension is palpable in this book, and on more than one level. Gruesome at times, but very difficult to put down.
Link to purchase the book
MY THOUGHTS:
Say No More follows Say You're Sorry, the first book in the Sacramento series. In the first book readers met Gideon, who escaped a dangerous cult when he was a teen. It is now years later, and in this book we meet Mercy Callahan, Gideon's sister. They both escaped the cult back then. Well, there is a dangerous cult member who will stop at nothing when he discovers that Mercy is alive and well. In keeping Mercy safe, she is brought back into contact with Gideon, but also with Gideon's very good friend, Rafe Sokolov.
This history is clearly explained for readers who haven't read the first in the series. However, I do think readers would benefit by reading the first book before taking this one one. This book focuses on Mercy, but also on Ephraim Burton, leader of the cult. Ephraim hurt many people over the years, including Mercy. Now Ephraim is intent on finding her again, leaving a trail of bodies at every turn.
Mercy doesn't back down when given the opportunity to stop Ephraim once and for all, no matter the danger. She never stopped rooting around for ways to end the cult, and this makes Ephraim none too happy. Rafe agrees to help Mercy in her search, and vows to keep her safe. Meanwhile the pair have an undeniable chemistry.
I was touched by Mercy and Gideon's reunion. It was very sad to see why they were pulled apart, but gratifying to see them together again. Another impressive thing to me in this story was Rafe's attraction and attention to Daisy. He knew she was fractured, and while their feelings grew for each other, Rafe's caring and patience was remarkable.
While readers are getting to know more about Daisy and Rafe, as well as his large family, they also get to see the very dark side of Ephraim and how relentless and brutal he is. I love how this book was written, and found it to be a much stronger read than the first in the series. I think it was because of the cult connection, which while being painful to read about, was equally rewarding to see that so many people escaped.
I hope this series continues, because both Mercy and Rafe have a lot of people that love them, and those very ones were often mentioned in this book. So, as a greedy reader, I am asking for more. Kudos to Karen Rose for writing such an intense and addictive story.
Many thanks to Berkley Books and to NetGalley for this ARC for review. This is my honest opinion.
ABOUT THE AUTHOR: 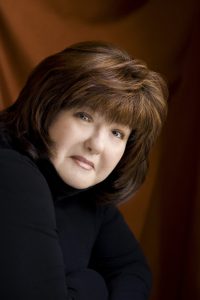 Karen Rose was introduced to suspense and horror at the tender age of eight when she accidentally read Poe’s The Pit and The Pendulum and was afraid to go to sleep for years. She now enjoys writing books that make other people afraid to go to sleep. Karen lives in Florida with her family, their cat, Bella, and two dogs, Loki and Freya. When she’s not writing, she enjoys reading, and her new hobby – knitting.