SERIES REVIEW - City of Windows and Under Pressure 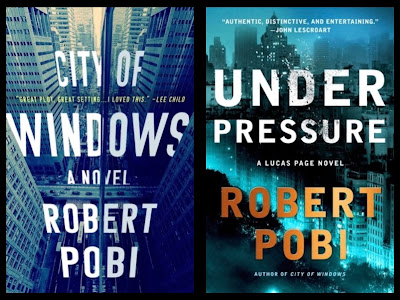 Today in this combined review I am happy to present Lucas Page and how he uses his special skills, despite previous grave injuries, to bring justice to those who deserve it. 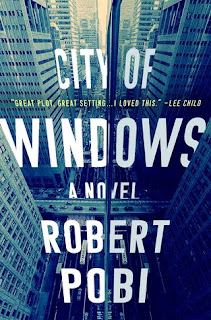 During the worst blizzard in memory, an FBI agent in a moving SUV in New York City is killed by a nearly impossible sniper shot. Unable to pinpoint where the shot came from, as the storm rapidly wipes out evidence, the agent-in-charge Brett Kehoe turns to the one man who might be able to help them--former FBI agent Lucas Page.

Page, a university professor and bestselling author, left the FBI years ago after a tragic event robbed him of a leg, an arm, an eye, and the willingness to continue. But he has an amazing ability to read a crime scene, figure out angles and trajectories in his head, and he might be the only one to be able to find the sniper's nest. With a new wife and family, Lucas Page has no interest in helping the FBI--except for the fact that the victim was his former partner.

Agreeing to help for his partner's sake, Page finds himself hunting a killer with an unknown agenda and amazing sniper skills in the worst of conditions. And his partner's murder is only the first in a series of meticulously planned murders carried out with all-but-impossible sniper shots. The only thing connecting the deaths is that the victims are all with law enforcement--that is until Page's own family becomes a target.


To identify and hunt down this ruthless, seemingly unstoppable killer, Page must discover what hidden past connects the victims before he himself loses all that is dear to him.

In City of Windows we meet a new hero in the form of former FBI agent Lucas Page. I received Under Pressure, the second book the Lucas Page series, so I just had to read this book first. Boy am I glad I did!

Lucas excelled at his job, however, he was very seriously wounded by a blast and lost an arm, leg and an eye. Lucas had a special skill. He could walk into a crime scene and analyze it completely, as if he was there when it occurred. This went a long way to making him excellent when it came to solving heinous crimes. While he left his job, this did not slow him down in life. Lucas has a very loving wife and a growing family, including adopting children. Now a university professor and author, Lucas certainly has his hands full.

When an FBI agent is killed by a sniper's bullet, Lucas takes it personally and will go to whatever lengths necessary to bring the killer to justice. Readers are getting to know Lucas, how he was injured, but also how he does not allow the several prosthetics that are now a permanent part of his life to slow him down one bit. We also get to see how Lucas interacts with his wife and children, and the strain it puts on his wife as he once again takes on dangerous cases.

I am so pleased that I took the time to read this book before moving on to the review title. I said in my video review of this book that Lucas is already one of my favorite heroes. 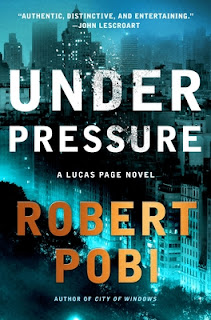 A series of deadly explosions rock the city of New York and with too many victims and no known motive, the FBI turns once again to Dr. Lucas Page in Robert Pobi's Under Pressure.

On a beautiful October evening, New York City's iconic Guggenheim Museum is closed for a tech company's private gala. Until an explosion rocks the night, instantly killing 702 people, including every single attendee—yet the damage to the building itself was minimal.

An explosion of that precision was no accident and, in response, the FBI mobilizes its entire team -- but the sheer number of victims strains their resources. Were all 702 victims in the wrong place at the wrong time, or was there only one target and 701 unlucky bystanders? That many victim files is a staggering amount of data to sort through and Brett Kehoe, Special Agent in Charge of Manhattan, decides that he can't do this without more computational power.


Dr. Lucas Page, astrophysicist, university professor, and former FBI agent, is uniquely gifted for the task at hand—he can visualize a crime scene as if he was a bystander and can break down any set of data at a glance. Even though Page wants nothing to do with the FBI, with his city under attack and his family at risk, he steps in to find a killer in a haystack before they strike again.

Lucas Page is back at again. This time there was a series of deadly explosions with way too many victims. The FBI once again asked former Special Agent to help solve the crime. Lucas has the special ability to view a crime scene and analyze it bit by bit as if he had been there. This allows Lucas to collect clues that perhaps others, no matter how skilled, might miss.

Because of the dangers of the previous case Lucas took on, he has temporarily moved his family. With this case having much higher stakes, Lucas cannot help but worry about their continued safety. While Lucas and his wife are very close, this new case adds a layer of stress to their marriage.

The FBI has pulled out all of the stops to step ahead of the bomber with hopes of no more lives being lost. The carnage was awful, with over 700 victims. Lucas and the FBI team are trying to find the motive. Was one person the target and the rest of the victims collateral damage?

As I mentioned in my review of the first book in this series, Lucas quickly climbed to the top of my list of favorite heroes. Not only has he previously survived a blast himself, with the loss of limbs and an eye, his brilliance is barely surpassed by anyone I have read of in a while. Also, his dedication to his family is extremely touching.

Can Lucas and the team find the killer? What just might get in the way before more lives are tragically lost? In this thrilling story by Robert Pobi, we are certain to find out. For a thrilling read that just might capture your attention from beginning to end, I highly recommend Under Pressure. I don't know when book three is due, but as soon as I hear of it, I will be certain to make sure to grab it and to read it. No doubt I will devour it as I did these first two books in the series, with the first being City of Windows.

Many thanks to Minotaur Books and to NetGalley for this ARC for review. This is my honest opinion.

Robert Pobi’s novels have been published in more than twenty-five countries, making bestseller lists around the world.

He lives in the country, but  spends most of the summer and fall months at his cabin on a lost lake in the mountains (where a 3:00 a.m. swim one August night inspired his novel Mannheim Rex). He does not have telephone, internet, or television at the cabin; if he needs to check email, he has to drive eight miles to a tiny town hall for the free wifi at the picnic table inhabited by a gang of octogenarian chain smokers. When the cold starts chewing on the trees, he heads to a place he has on the beach, where his nearest neighbor—a retired cop who shares the same first name—makes the best whiskey sour he has ever tasted.

He writes at a desk that once belonged to Roberto ‘God’s Banker’ Calvi, and has (or definitely doesn’t have) a small collection of shrunken human heads (known as tsantsas in anthropological and collector circles) that continually weird out his housekeeper. He owns too many fountain pens and is constantly making notes in old-school Mead marble composition books.

Among his small group of friends, he is infamous for getting the only Buddhist monk in their ranks to yell at him (they were walking in the forest and debating the merits of meditation at the time—true story).

His favourite books on writing are The Joy of Writing: A Guide for Writers Disguised as a Literary Memoir by Pierre Berton and Lessons from a Lifetime of Writing: A Novelist Looks at his Craft by David Morrell.


Due to his private nature, he does not do Instagram, Facebook, Twitter, Snapchat, TikTok or any other social media. He rarely does writers conferences, events, book signings, or interviews. And much to his agent’s irritation, he does not own a cell phone. He is, however, working on his email skills.