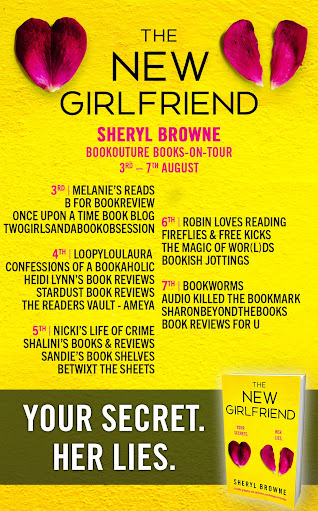 Today is my stop on the Blog Tour for The New Girlfriend by Sheryl Browne.

DESCRIPTION:
Some secrets are more dangerous than others.
Cassie once did something so bad she’s never spoken about it since.
When her beloved son, Josh, dies suddenly in a tragic accident, Cassie is overcome with grief. And, as she cries on her husband’s shoulder, her phone lights up with a message that terrifies her.
I know what you did and I’m going to make you pay.
Somebody from Cassie’s past has found her and they want everyone to know just what kind of a woman she is.
As Cassie struggles to keep the message from her husband, someone knocks on the door of their perfect family home and Cassie discovers she isn’t the only person keeping secrets. Before her stands her son’s girlfriend – a girlfriend Cassie didn’t know about.
And when Cassie closes the door behind the new girlfriend, she has no idea who she has just let into her life. Her biggest secret is about to be revealed. And you won’t believe what Cassie does next…
A truly gripping page-turner that will keep you reading well into the night, The New Girlfriend is perfect for fans of The Girl on the Train, My Lovely Wife and Gone Girl.
BUY LINKS:
Amazon: https://bit.ly/2WYANud
Apple: https://apple.co/36E3tfL
Kobo: https://bit.ly/3cd5CzZ
Google: https://bit.ly/36FBL1V
MY THOUGHTS: 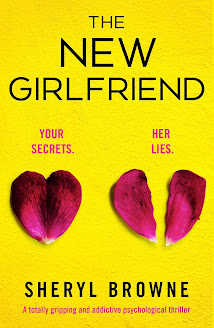 Title:   The New Girlfriend
Author:  Sheryl Browne
Genre:   Psychological Thriller
Publisher:  Bookouture
Format:  Kindle ARC
No. of Pages:   294
Date of Publication:   August 3, 2020
My Rating:   5 Stars
Cassie feels as if she's lost all hope. Her only son, Josh, has died and she is simply trying to hold on. Previously, Cassie had dealt with a serious illness so she often wonders if her husband Adam will stay around. They never had children together, and although Adam was a wonderful stepfather to Josh, now that he is gone, she worries as to what is left for her and Adam.

She gets the surprise of her life, however, when a young woman she briefly saw at Josh's funeral shows up on her doorstep with a young baby in tow. Not only does the woman, Kim, tell her that the Josh was the father, baby Samuel is the spitting image of Josh. Then, she said the two recently became engaged! Who is the girl, and why had Josh never mentioned her? Cassie hardly has time to think about that. She now has something to live for - a connection to Josh! And just maybe her insecurities concerning Adam will go away.
Meanwhile, a lot of matters begin to come to light. First of all, Josh's death was suspicious. Also, Kim seems more than a bit off. What is more is that Cassie has a huge secret she has kept hidden for years. She is now getting notes and such that talk about her "lie". What lie is this? What does it have to do with her, Josh and Adam? Also, why is she now being haunted now that Josh is dead and Kim has shown up?
Let me tell you, this book was a whopper! Without spoiling the book I just want to say that my head was spinning when it came to Kim. But she was not the only one. So, the question comes to mind: who can the reader trust in this story - Cassie, Kim, Adam, or even Josh? With the various points of view, even those of Josh before he died, let's just say that this story is filled with shocking twists that kept me tapping my Kindle from beginning to end. I love when I can get behind the motivations of characters, and then trying to sort out whether or not they are redeemable.
I have read several books by Sheryl Browne, and whenever one of her books comes up for review, it is an easy Yes. I always know that I am going to be taken on a wild ride. She definitely succeeded with The New Girlfriend. I can't wait to see what she next has in store for her readers.
Many thanks to Bookouture and to NetGalley for this ARC for review. This is my honest opinion.
ABOUT THE AUTHOR:

Sheryl Browne writes psychological thriller and edgy contemporary fiction. A member of the Crime Writers’ Association, Romantic Novelists’ Association and awarded a Red Ribbon by The Wishing Shelf Book Awards, Sheryl has several books published and two short stories in Birmingham City University anthologies, where she completed her MA in Creative Writing.
To find out more about Sheryl’s novels, go to www.facebook.com/SherylBrowne.Author/ or follow @SherylBrowne on Twitter.
To find out more about Sheryl, go to www.sherylbrowne.com.