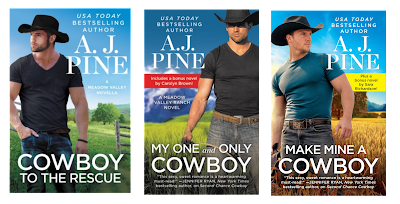 In this combined series review. I will be reviewing the first three books in the Meadow Valley  series by A.J. Pine. 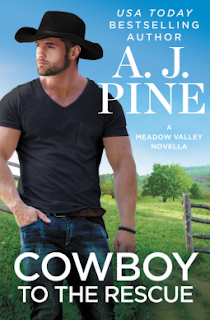 From "a fabulous storyteller" (Carolyn Brown, New York Times bestselling author) comes a western romance about a cowboy who isn't afraid to break the rules.

All designer Ivy Serrano wants is a fresh start. But instead, her Meadow Valley homecoming includes an electrical fire, a trashed custom dress, and a very handsome fireman who knows how to push all her buttons. Lieutenant Carter Bowen may set off sparks of his own, but the last thing Ivy needs now is town gossip . . . or to risk loving another firefighter.

New to small-town living, Carter is determined to prove himself, both at the station and at the fledgling dude ranch where he volunteers. That means no mistakes, no distractions, and definitely no Ivy. Yet there's something about the sassy shop owner that he just can't resist. As things heat up between them, Carter's more certain than ever that she's the one. But can he convince her they have a future worth fighting for?

Look for the first novel in the all-new Meadow Valley series, MY ONE AND ONLY COWBOY, on sale December 2019!

It is the day of the grand opening of her new shop and the smoke detector goes off. Ivy Serrano does not want to panic, but she can't lose her business. Not now. Not after finally getting what she wants to make her mark. She finds the source of the fire, a faulty wire, and quickly puts it out. However, the smoke detectors are still blaring. That is not the only sound she hears. Sirens are getting closer and closer. When the firemen get there, she tells them she has it under control. However, they must follow protocol and check things out for themselves.

The fire lieutenant Carter Rowan doesn't have time to listen the woman at the fire, whom he soon learns is named Ivy. He orders his men to look closely at the source in order to confirm that the danger is over. The sparks of the fire might indeed be gone, but what is he to do about the sparks that immediately flare between him and Ivy?

Ivy is shocked at her reaction to Carter. Of course he is handsome, stunning even, but he is a fireman and she has every reason never to want to think she could like a fireman, not even for one second. She has a very good reason to be wary of any feelings that soon begin to grow between her and Carter. After all, it is a small town, and the two see each other aside from the fire at her shop.

Carter has some issues on the job, as it is a new one for him considering he recently moved to Meadow Valley. But did he end up in this town simply to find the perfect woman in the form of Ivy? Also, can Carter help Ivy overcome her reluctance to consider a relationship with him?

Cowboy to the Rescue is a novella that makes a very nice start to a new series. The characters are likable and the conflict real. I loved how these two came together and how they resolved their differences, thus ending this book on a very sweet note. 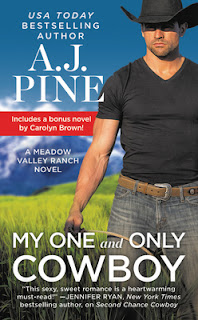 Delaney Harper thought she'd seen the last of Meadow Valley two years ago after she divorced her lying, cheating, gambler of a husband who left her broken-hearted and, well, just flat broke. But news that her ex sold their property---without legally removing her from the deed---means heading back to claim her share of the land---and possibly her dream.

Sam Callahan, co-owner of the Meadow Valley guest ranch, is barely keeping his head above water. He bought the land for a steal, but keeping a new business afloat is another story. When a gorgeous blonde barges onto his property on a quiet Friday afternoon insisting he bought the place in a fraudulent sale---and that she's there to prove she still owns half the land---Sam realizes he's got much more to worry about. He could lose everything---including his heart.

Two full books for the price of one. Includes the bonus novel, Toughest Cowboy in Texas (Happy, Texas #1) by Carolyn Brown.

My One and Only Cowboy is the first book in the Meadow Valley series, although it was preceded by a novella, Cowboy to the Rescue. Delaney Harper is all too glad to be rid of her cheating and lying husband and was glad to have left Meadow Valley for good. However, one of the things her ex did was to sell their property there without finishing the process, thus leaving her no choice but to head back to the small town to reclaim what is hers.

When Sam Callahan discovers that Delaney Harper is in town to claim the land he just purchased, he is in for a rude awakening. Not only is she claiming that it is hers, she has plans to follow her dream. The thing is, Sam's ranch is also a dream, one he shares with his brother Ben and their friend Colt.

Whose dream will win out at the ranch on the property. This made me think of a wishbone where two parties are pulling on a stick, but only one will get the prize. Then, while Sam and Delaney go back and forth between their claims, there is a passion that starts off small, but begins to truly flare between them.

This is a very sweet story. Of course, every romance has a couple, then a conflict, then a resolution before a happily ever after can be had. It is a tried and true formula. What makes this book work is that there is an extra layer when it comes to something that Sam is dealing with, and that actually continues on into the third book of the series, Make Mine a Cowboy. It is this issue that adds a level of seriousness to an already well-written story.

Many thanks to Forever Yours and to NetGalley for this ARC for review. This is my honest opinion.
- - - - - 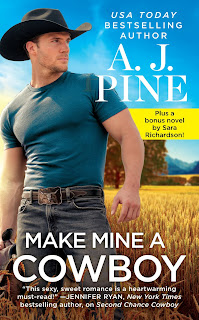 Dr. Charlotte North has no time for a player, not even one as tempting as Ben Callahan. Besides, Charlotte is only in Meadow Valley for a few months to help her grandmother. After that, it's back to New York and the career she loves. But when her gram starts to meddle in her personal life, Charlotte knows just the man to help her out. Ben's the perfect no-strings boyfriend, until Charlotte discovers that beneath that rugged, charming exterior lies a sweet and bighearted cowboy.

Ben Callahan is tired of people assuming he's an immature playboy, so when the smart and sexy Charlotte asks him to be her pretend boyfriend, he jumps at the chance to show everyone that he's changed his ways. Though he and Charlotte are calling their relationship fake, Ben's heart says otherwise. Two months with Charlotte isn't nearly enough. Will Ben be able to prove he's worthy of her for real before their time together is up, or will she leave Meadow Valley---and him---forever?

I have enjoyed the previous books in this series, a novella, Cowboy to the Rescue and the first book, My One and Only Cowboy. The previous book had a very sweet love story with a bit of an emotional edge. That is continued in this book, Make Mine a Cowboy. Ben Callahan is about to get some very important news, news that will affect not only the rest of his life, but the life choices he makes. Just as he is coming to terms with this news, he is roped into pretending to be a woman's boyfriend.

This is no easy task, because the woman, Dr. Charlotte North, is someone that affects Ben on a very deep level. But, why is he agreeing to do this? Charlotte is in town because her grandmother has been injured and so Charlotte takes some time away from her duties as a doctor to help her grandmother to heal, as well as to take on duties at the ranch that Ben owns with his brother and their friend. She and Ben have a bit of a history, thus a connection that Charlotte knows will work.

So, the question comes up, why have a pretend boyfriend. Well, Charlotte's loving grandmother wants her busy granddaughter settled and happy, and so while Charlotte is in town, just maybe she can be set up and find the man of her dreams. Charlotte decides to thwart that by asking Ben to pretend to be her boyfriend around their grandmother.

It works. Sort of. They do make a believable couple, but that is more due to the emotional and physical attraction they both share, thus making pretend actually look very real. Meanwhile, that issue that all but floored Ben is never far from his mind. As a matter of fact, he is about to make some serious changes in his life and also hopes to change how others view him.

I really enjoyed this book by A.J. Pine. I loved the characters and the plot, with the extra level of emotional angst. Also, I loved the "impossible" nature of the story when it came to resolving the conflicts that affected Ben and Charlotte. This is an endearing story that concluded with a very warm ending.

Many thanks to Forever Yours and to NetGalley for this ARC for review. This is my honest opinion. 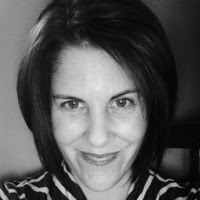 A teen librarian by day and a romance writer by night, A.J. Pine can’t seem to escape the world of fiction, and she wouldn’t have it any other way. She’s the author of the If Only series (Entangled Embrace), the Only You series (Berkley/Intermix), the Kingston Ale House series (Entangled Select), and the Crossroads Ranch series (Forever Romance). When she finds that 25th hour in the day, she might indulge in a tiny bit of TV where she nourishes her undying love of vampires, superheroes, and a certain high-functioning sociopath detective. She hails from the far off galaxy of the Chicago suburbs.