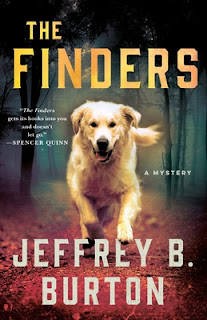 What happens when the hunter becomes the hunted?

Mason "Mace" Reid lives on the outskirts of Chicago and specializes in human remains detection. He trains dogs to hunt for the dead. Reid’s coming off a taxing year—mourning the death of a beloved springer spaniel as well as the dissolution of his marriage. He adopts a rescue dog with a mysterious past—a golden retriever named Vira. And when Reid begins training Vira as a cadaver dog, he comes to realize just how special the newest addition to his family truly is…


Suddenly, Reid and his prize pupil find themselves hurled into a taxing murder case, which will push them to their very limits. Paired with determined Chicago Police Officer Kippy Gimm, Mace must put all his trust in Vira's abilities to thwart a serial killer who has now set his sights on Mace himself.


There could be no better partnership between Mason Reid and his cadaver dog Vira. Vira has been specially trained in locating human remains. It is a difficult job, but it is one that must be done. Vira is not Reid's first partner. Actually not only did his beloved dog die, his marriage recently ended in divorce.

So, Reid has taken Vira on, and not only are they thrust headfirst in a difficult murder case, they are paired with Chicago Police Officer Kippy Gimm. A serial killer is on the loose and Reid has to fight an uphill battle to stop the vicious killer before the body count rises.

I loved this book - actually any book with a canine partner. I am happy that this book is beginning of what is most certainly to be a thrilling story. Seeing how this specialty dogs are trained was eye-opening, as well as watching the bond between Reid and Vira grow. While Reid, Vira and Kippy work hard together, the tension ratchets up from beginning to end.

This is my first time reading Jeffrey A. Burton, but it certainly won't be my last. I am eager to continue the series with The Keepers, set for release in June, 2021.

Many thanks to Minotaur and to NetGalley for this ARC for review. This is my honest opinion.

Jeffrey B. Burton was born in Long Beach, California, grew up in St. Paul, Minnesota, and received his BA in Journalism at the University of Minnesota. Novels in Burton's Agent Drew Cady mystery series include: THE CHESSMAN, THE LYNCHPIN, and THE EULOGIST. His short stories have appeared in dozens of magazines. Jeff is a member of the Mystery Writers of America, International Thriller Writers, and the Horror Writers Association. He lives in St. Paul with his wife, an irate Pomeranian named Lucy, and a goofball of a Beagle named Milo.