Review - A Twist in the Tail 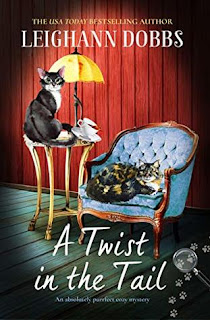 ‘Talk about inconvenient. Not only did I have a dilapidated mansion and no money to repair it with, two cats I had no idea how to care for and a room full of cranky guests waiting for their breakfast, I also had a dead body on my hands.’

Josie Waters has to admit she may have acted a bit hastily when she agreed to purchase the Oyster Cove Guesthouse – a charmingly gabled Victorian mansion on the breathtaking Maine coast – from elderly family friend Millie Sullivan. But Josie was desperate to flee Ohio and in particular her ex-husband, a chef who loved his job so much he left her for it. And anyway, how hard can running a guesthouse be?

The truth is, Oyster Cove Guesthouse is a mouldering money pit with falling-in roof and a cohort of regular guests who are as mischievous as a litter of kittens. And Millie keeps dropping by to dispense unasked-for advice. And Josie might have made a mistake in promising to adopt Oyster Cove’s two resident cats Nero and Marlowe, and treat them in the manner to which they’ve become accustomed. Josie has never had a cat before… let alone two feisty felines who think they own the place.

Ok, it’s not going well. At least it can’t get any worse, Josie thinks. Until her first guest ends up dead.
Link to purchase the book

When Josie Waters purchased a mansion in Maine, the Oyster Cove Guesthouse, she didn't know that murder - and two nosy and bossy cats - would be part of the deal. Add in an odd assortment of guests and Josie certainly has her hands full.

Josie thought she made a very wise, if not impulsive, decision to buy the guesthouse. Having dealt with a divorce and with her daughter having moved away for work, the distraction should definitely be in her favor. Josie thought the worst of her problems would be is that she is hardly any sort of cook, and coming up with good meals for house guests being the biggest problem she might have to cope with.

Things were nothing like she imagined. For starters, the mansion is falling apart and she begins bleeding money almost immediately. Then she is dealing with more than the two cats that were part of the deal, she must also contend with a litter of kittens. Josie bought the house from her mother's friend, Millie, and Millie has 1,001 reasons for always dropping in.

Imagine Josie's shock when her first house guest ends up dead?! Despite the police investigation into the matter - Josie, her mother - and Millie - oh, and Nero and Marlowe, the resident cats - all decide to solve the murder.

What a fun story! The cats talk to one another, find and plant clues, and do whatever they can to point Josie in the right direction. All I could think of when reading this book was the movie Homeward Bound, where the animals talked. With that image in mind, I was truly able to enjoy this story.

A Twist in the Tail is the first book in the Oyster Cove Guesthouse series. This delightful story was a quick read and lovers of cozy mysteries will be glad if they add this to their queue. The next book is A Whisker in the Dark, to be followed by A Purrfect Alibi. 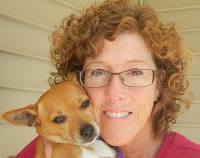 USA Today bestselling author, Leighann Dobbs, discovered her passion for writing after a twenty year career as a software engineer. She lives in New Hampshire with her husband Bruce, their trusty Chihuahua mix Mojo and beautiful rescue cat, Kitty. When she's not reading, gardening, making jewelry or selling antiques, she likes to write cozy mystery and historical romance books.

Don't miss out on the early buyers discount on Leighann's next cozy mystery - get a TEXT alert straight on your cellphone. Just text COZYMYSTERY to 88202.