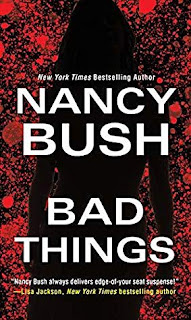 Some mistakes you have to live with . . .
One victim succumbs to an overdose. Another is brutally bludgeoned to death. Each, in turn, will pay. Because you never forget the friends you make in high school--or the enemies . . .

And others . . .
In the wake of her stepbrother Nick's death, Kerry Monaghan is visiting Edwards Bay. Kerry has just returned to the small town overlooking an arm of Puget Sound that she left before high school, though not before falling hard and fast for Cole Sheffield, now with the local PD. But Nick's death may be more than an accident. And soon there are others--all former teenage friends, linked by a dark obsession.

You will die for . . .
With Cole's help, Kerry sets out to learn the truth about what happened to Nick. But within Edwards Bay is a shocking legacy built on envy and lust--and a secret that has unleashed a killer's unstoppable fury . . .

There is a group of former high school classmates referred to as the A-Team. One of them is the apparent victim of an overdose. Then another is brutally murdered. Will anyone else from the group suffer an awful fate? Are these people really friends, or is what happened during their high school years enough to bond them together for life...or death?

What a great premise and quite a promising book. However, there were a couple turns in this story that changed my beginning impressions. First of all, the underlying cause of the murders, and ever-present danger, was all wrapped up in sex. I cannot even begin to count how many sexual references there were in this story. The other issue I had is in reminding readers, over and over, that one of the characters is bipolar. I find myself to be a responsible reader who can actually remember facts and characteristics of the players in any book I read. I can see being reminded once or twice, but the references were far too frequent for my liking.

Back to what did work in this book. The large cast of characters hid behind secrets, lies and covetousness. These were literally deadly sins. The story begins with Kerry Monaghan having returned to the small town of Edwards Bay to be nearer to her family, as well as to begin a new job. When her stepbrother Nick is murdered she is devastated. This also brings her back into contact with her ex, Cole Sheffield, who is chief of police, and one of Nick's high school friends.

While the story progressed, secrets of the past begin to come to light. All the while connections are slowly made that increase the danger to more than one of the group of friends. When I say group of friends, there were many. However, it was rather easy to keep track of all of them. The conclusion was actually exciting and I will admit to not being able to put this book down, and will say that the killer was really a surprise to me.

Although this did not quite hit the mark for me, I will continue to read works by this author.