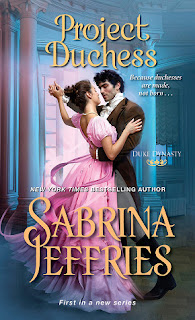 DESCRIPTION:
From New York Times bestselling author Sabrina Jeffries comes a sparkling new series about an oft-widowed mother’s grown children, who blaze through society in their quest for the truth about their fathers . . . and in the process find that love just might conquer all . . .

A series of stepfathers and a difficult childhood have left Fletcher “Grey” Pryde, 5th Duke of Greycourt, with a guarded heart, enviable wealth, and the undeserved reputation of a rogue. Grey’s focus on expanding his dukedom allows him little time to find a wife. But when his mother is widowed yet again and he meets the charmingly unconventional woman managing his stepfather’s funeral, he’s shocked to discover how much they have in common. Still, Grey isn’t interested in love, no matter how pretty, or delightfully outspoken, the lady . . .

Beatrice Wolfe gave up on romance long ago, and the arrogant Duke of Greycourt with his rakish reputation isn’t exactly changing her mind. Then Grey agrees to assist his grief-stricken mother with her latest “project”: schooling spirited, unfashionable Beatrice for her debut. Now that Beatrice is seeing through Grey’s charms to his wounded heart, she’s having trouble keeping him at arm’s length. But once Grey starts digging into her family’s secrets, she must decide whether her loyalties lie with her family . . . or with the man whose lessons capture her heart . . .
“Anyone who loves romance must read Sabrina Jeffries!”
—Lisa Kleypas, New York Times bestselling author (less)

Fletcher "Grey" Pryde has been called back to his mother's home after her third husband, and a third Duke, has died. Grey experienced hardship as a child and was separated from his family. Although reluctant to return home now, he knows he must see to his mother's well-being. Things are not going so well for Grey at the moment. Although a very rich duke, he has established quite a reputation, albeit undeserved. Meanwhile his aunt is pressuring him to marry his cousin, and that is something neither of them wants.

Beatrice Wolfe is the cousin of Grey's half-brother, and Grey's mother has offered to help her by giving her a Season in London. With the family mourning now, the debut must be delayed. However, Grey's mother wants him to school Beatrice in certain matters, like proper dancing. Meanwhile, Grey's brother Sheridan is quite certain that his father, and also his uncle, previously, were murdered. The man he thinks guilty is none other than Beatrice's brother Joshua. Sheridan wants Grey to investigate the cause of both deaths.

Grey elects to spend time with the delectable Beatrice, leaving Sheridan to sort the more serious matters himself. However, Grey has very good reason for not wanting to become romantically involved. Beatrice herself gave up on romance, but she is very concerned for her and her brother's future so she has agreed to the tutelage offered by her aunt. It only takes a few glances at Grety for Beatrice to realize she is smitten.

What a delightful romance by Sabrina Jeffries! I loved all of the conflict involved with this story while the foundation for a heartwarming romance was being built. This made this become a multi-layered story that flowed smoothly through the pages. While this is my first read by Sabrina Jeffries it certainly will not be my last. I am eager to continue on with this series. The next book is Duke Dynasty and is slated for release in February, 2020.

Sabrina Jeffries is the New York Times bestselling author of more than 50 novels and works of short fiction (some written under the pseudonyms Deborah Martin and Deborah Nicholas).

At home in front of a crowd, Jeffries is a sought-after speaker, as evidenced by her 2010 gig as emcee for the National Romance Writers of America’s 30th Anniversary Awards Ceremony.

Whatever time not spent speaking to organizations around the country or writing in a coffee-fueled haze is spent traveling with her husband and adult autistic son or indulging in one of her passions—jigsaw puzzles, chocolate, and music.

With over 9 million books in print in more than 20 languages, the North Carolina author never regrets tossing aside a budding career in academics (she has a Ph.D. in English literature) for the sheer joy of writing fun fiction, and hopes that one day a book of hers will end up saving the world.