Review - The Boy in the Photo 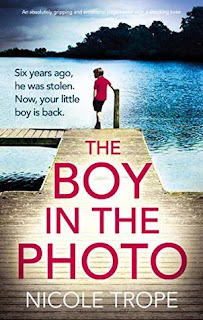 She becomes aware of the silence at the other end of the line. A prickling sensation crawls up her arms, her heart rate speeds up. ‘Found who?’ she asks, slowly, carefully, deliberately.
‘They found Daniel.’

Megan waits at the school gates for her six-year-old son, Daniel. As children come and go, the playground emptying, panic bubbles inside her. Daniel is nowhere to be found.

According to his teacher, Daniel’s father, Greg, has picked up his son. Except Greg and Megan are no longer together. After years of being controlled by her cruel husband, Megan has finally found the courage to divorce him. Hands trembling, she dials his number, but the line is dead.

Megan is feeding baby daughter, Evie, when she gets the call she has dreamt about for years. Daniel has walked into a police station in a remote town just a few miles away. Her son is alive – and he’s coming home.

But their joyful family reunion does not go to plan. His room may have been frozen in time, with his Cookie Monster poster and stack of Lego under the bed, but Daniel is no longer the sweet little boy Megan remembers.

Cold and distant, Daniel is grieving the death of his father, blaming Megan for his loss and rejecting his family. And as Megan struggles to connect with the son she no longer recognises as her own, she begins to realise that Daniel has a secret. A secret that could destroy their family and put them in terrible danger.

A heartbreaking, emotional drama about a family in turmoil, with a jaw-dropping twist that will blow you away. Fans of Jodi Picoult, Liane Moriarty and Lisa Wingate – this moving and poignant novel is for you.
Link to purchase the book

Megan is divorced and is raising six-year old son Daniel. One day, when picking him up from school, he is nowhere to be found. Quite naturally, in full panic mode, Megan approaches school authorities. When it is discovered that her ex-husband, Greg, actually picked Daniel up, the police are notified, as this was not part of the custody arrangement. Despite several phone calls, along with the police's help, Greg and Daniel have completely disappeared.

Fast forward six years later. Megan has never given up looking for Daniel, having used whatever sources she could. She is now married again, with a baby, Evie. One day her now husband, Michael, a detective, calls her with the news that Daniel has been found. Equally eager and nervous, Megan prepares to reunite with Daniel.

Things are quite difficult now that Daniel is back with Megan. For starters, his head was filled with awful lies about her so he is more than guarded. Not only is Daniel now missing his father, he has a secret and odd behaviors that give both Megan and Michael pause.

The story is mainly focused on the present, but snippets of Daniel's life while living with his father are revealed. Sadly, the dangerously abusive situation that Megan experienced with Greg are in some ways being reflected in Daniel's thoughts and actions. Not only does Megan worry about her daughter's safety around Daniel, but she is worried about her own.

This was truly a heartbreaking story. Quite naturally, I was very sad for Daniel for having his childhood snatched by a cruel father, but I so worried about the adjustment period. Also of concern was whether or not Daniel would be able to trust his mother after hearing the things his father told him. This highly charged book had an explosive ending that left me in tears.

There were a few twists and turns in this compelling story, but the one at the end left me in utter shock. I hadn't read anything by Nicole Trope before so I simply was not prepared for the excellence that was laid before me. 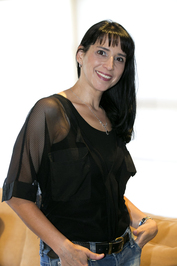 Nicole Trope went to university to study Law but realised the error of her ways when she did very badly on her first law essay because-as her professor pointed out- ‘It’s not meant to be a story.’ She studied teaching instead and used her holidays to work on her writing career and complete a Masters’ degree in Children’s Literature. After the birth of her first child she stayed home full time to write and raise children, renovate houses and build a business with her husband.

The idea for her first published novel, The Boy under the Table, was so scary that it took a year for her to find the courage to write the emotional story. Her second novel, Three Hours Late, was voted one of Fifty Books you can’t put down in 2013 and her third novel, The Secrets in Silence, was The Australian Woman’s Weekly Book of the month for June 2014.

She lives in Sydney with her husband and three children.