Review - Someone We Know 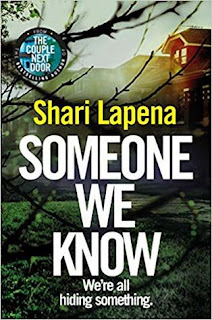 Maybe you don't know your neighbours as well as you thought you did . . .

"This is a very difficult letter to write. I hope you will not hate us too much. . . My son broke into your home recently while you were out."

In a quiet, leafy suburb in upstate New York, a teenager has been sneaking into houses--and into the owners' computers as well--learning their secrets, and maybe sharing some of them, too.

Who is he, and what might he have uncovered? After two anonymous letters are received, whispers start to circulate, and suspicion mounts. And when a woman down the street is found murdered, the tension reaches the breaking point. Who killed her? Who knows more than they're telling? And how far will all these very nice people go to protect their own secrets?

In this neighbourhood, it's not just the husbands and wives who play games. Here, everyone in the family has something to hide . . .

You never really know what people are capable of.

Teenager Raleigh Sharpe admitted to his parents that he broke into a few homes, but didn't actually steal anything, and that he was only committing harmless pranks. His mother Olivia feels that it is only right to pen notes admitting what he did and leaving it at those residences. However, he was lying to his parents. His father, Paul, go a step further and insists they take him to an attorney. They want to really teach him a lesson. After the consultation, the lawyer says writing letters was a mistake.

Right around the time this happened, a submerged car is discovered and the body of a beaten woman, Amanda Pierce, is discovered in the trunk. One of the people that got the letters was the husband, Robert, of the woman found in the trunk. Another person who got a letter is someone named Carmine. It will soon be revealed to the police investigating the murder that Carmine and Robert are neighbors of the Sharpes and they know one another. There is yet another person apparently connected and her name is Becky.

Lots of people, lots of names. The connection? Everyone is sleeping with someone, except their own marriage mates, or so it seems. The letters Raleigh's parents wrote brought everything out in the open. Quite naturally, everyone lies in the beginning. It was sort of like a game of hot potato with everyone sleeping with at least one other person. As the police begin to investigate, a lot of the pieces begin to tie together, but still, the killer of Amanda Pierce is hard to flush out.

There is one neighbor, Becky, who has quite a bit to say to Detective Webb, who is handling the case. Do these neighbors have more to hide besides the affairs? Quite naturally, I wonder who killed Amanda, was it the wives? Then, we get back to Raleigh, who is keeping things from his mother, just as his father is. They both have secrets. Olivia is apparently the only one in the house who has nothing to hide.

While this may seem like a lot, it actually isn't. I only elaborated to show the dynamics involved with this story. It is very easy to follow, and thus, was a very quick read. This was an intense book with plenty of twists and turns to keep even the most curious reader intrigued. I loved this book and look forward to reading much more by Shari Lapena.

Many thanks to Bantam Books and to NetGalley for this ARC to review in exchange for my honest opinion.

SHARI LAPENA  is the internationally bestselling author of The Couple Next Door and A Stranger in the House. She was a lawyer and an English teacher before turning her hand to fiction.

She lives in Toronto.