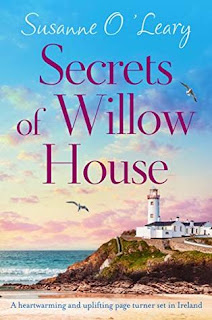 Maeve McKenna is on the verge of a breakdown. Having worked herself into the ground as a sought-after interior designer in London, she’s in desperate need of a vacation.

With the rugged shores of Ireland calling, Maeve visits her aunt Philomena in Sandy Cove, where she once, as a teenager, kissed a wild, mysterious boy – a kiss she has never been able to forget. The beautiful night’s sky is dotted with stars as far as the eye can see, and Maeve is worlds away from her chaotic life in the city.

As Maeve throws herself into restoring Willow House to its former glory, a deep friendship with Philomena begins to blossom. Surrounded by the faded walls and peeling carpets of the old mansion, together they stumble across a secret that turns their family upside down.

All the while, she can’t stop thinking about the enigmatic boy from her past, and that magical kiss… Is he still in Sandy Cove?

Just as she’s beginning to feel at home, reality calls. Part of Maeve can’t bear to leave Willow House and its rocky beach. Does she have the courage to leave the security of her old life behind, and put down new roots in Sandy Cove, or is that just a daydream?

Fans of Sheila O’Flanagan, Debbie Macomber and Mary Alice Monroe will fall head over heels for this stunning read.
Link to purchase the book

Maeve McKenna and her aunt Philomena Duffy make a great team. Maeve goes to stay with Phil for a little while after experiencing near-breakdown resulting from her high-pressure job as an interior designer. With regard to Phil, she is more than a bit lonely after becoming a widow after her husband Joe, has died. If possible, Phil wants to destroy their home, Willow House, but finances are tough. With Maeve's help, which turns into more ways than one, Phil has a chance of restoring her home.

Leaving all of the busy activity in London is wonderful for Maeve. Rather surprisingly, she is enjoying the small town there in Ireland. She spent time at Sandy Cove as a teenager, and the magic of the place grows on her rather quickly.

While in the process of restoring Willow House, Maeve stumbles upon something that ultimately changes Phil's life, but also hers as well. What Maeve found was a very well-kept secret, and it was a lot of fun seeing just what Phil did with that secret.

While in Sandy Cove, Maeve meets a man who reminds her of the very first kiss she she got as a teenager. His name is Paschal, and this part of the story was both sensitive and lovely. ON the other hand, however, Maeve wants to help Phil, she has her own life and future in London to consider.

Secrets of Willow House was a beautiful and engaging story, from beginning to end. It is the first book in the Sandy Cove series and I definitely look forward to seeing whose story is next, and that will be in Sisters of Willow House. 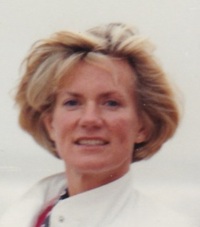 I was born in Sweden, but because of a chance meeting many years ago with an Irishman who had an international career, I have lived all over the world, and finally landed in County Tipperary, Ireland in 2002. I started my writing career by writing non-fiction and wrote two books about health and fitness (I am a trained fitness teacher). While writing these books, I discovered how much I loved the actual writing process. My then editor gave me the idea to write a fun novel based on my experiences as a diplomat's wife. This became my debut novel, 'Diplomatic Incidents' (now also an e-book with the title Duty Free'), published in 2001. I wrote three further novels, 'European Affairs' (now as an e-book with the title 'Villa Caramel'), 'Fresh Powder' (2006) and 'Finding Margo' (2007). The latter two were published by New Island Books in Dublin.

In 2010, when the publishing industry started to decline, I broke away from both publisher and agent and e-published my back list, along with two novels that were with my agent for submission. Since then I have written and e-published several further novels and, as a result, now have fifteen books out there in the e-book market worldwide. I write mainly in the women's fiction genre, some chick-lit, some contemporary romance, with two historical novels and three detective stories thrown into the mix.

My globetrotting life has provided me with the settings and characters of my novels, mainly set in France, where I lived for four years, and Ireland, where I live now.

We recently bought a holiday cottage on the Dingle peninsula in County Kerry on the west coast of Ireland. I was so inspired by the beautiful landscape and the people there, that I wrote three novels in quick succession, in what would become The Kerry Romance Series: Hot Property, Hot Gossip, and Hot Pursuit, all set in that beautiful county.

Apart from writing romantic fiction, I also enjoy co-writing with other authors. My two Scandinavian detective stories, Virtual Strangers and Virtual Suspects, both set in the scary world of the Internet, were co-written with fellow Swede Ola Zaltin of the TV series Wallander fame (he wrote some of the scripts for the TV feature films). I then joined forces with Boston lawyer and crime writer Pete Morin to write a political thriller with a satirical twist called Full Irish, which was followed by Half Irish a year later.

I have since gone back to romantic fiction and written four books in The Rivera Romance Series and three in The Tipperary Series, with a fourth part in the pipeline. After that, I plan to write something a little different, which will be revealed once it's ready.