Review - If Books Could Kill 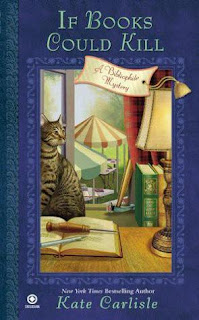 Book restoration expert Brooklyn Wainwright is attending the world- renowned Book Fair when her ex Kyle shows up with a bombshell. He has an original copy of a scandalous text that could change history-and humiliate the beloved British monarchy.

When Kyle turns up dead, the police are convinced Brooklyn's the culprit. But with an entire convention of suspects, Brooklyn's conducting her own investigation to find out if the motive for murder was a 200-year-old secret-or something much more personal.

Brooklyn Wainwright, an expert book restorer, is excited to go to Edinburgh, Scotland to attend and run a few workshops and to participate in a bookbinding contest. She just had a terrible experience when her former mentor and friend, Abraham Karastovsky was murdered. This trip is just what she needs.

Brooklyn is looking forward to seeing her old friend Helen, but is also pleasantly surprised to be traveling along with security consultant Derek Stone. Why is he going to Scotland anyway? When she runs into her ex Kyle, he asks her to protect a rare book that might harm the history of the British monarchy. Before Brooklyn can get enough details as to what to do with the book, she finds Kyle dead.

Wondering why she has suddenly stumbled among dead bodies, seeing Kyle sends her into a frenzy. Fortunately Derek is around and he is highly respected and easily helps to prove that Brooklyn had nothing to do with Kyle's murder. Things are not right with Brooklyn on several levels. For starters, it seems that her bookbinding tools were used in the murder. Then her hotel room is broken into. Just as Brooklyn took things upon herself to investigate what happened to Abraham previously, she jumps into the fray with Kyle's murder.

In this fast-moving second title in the Bibliophile series, readers are treated with some familiar characters. Brooklyn's best friend Robin is back, as well as her parents. Her arch nemesis Minka is back too. Another likable feature to this book is the first-person narration. This was done exceptionally well.

I am loving this series and am eager to read the third book in the series, The Lies that Bind. There are currently 13 books in the series, and, having read the final book, The Book Supremacy, already, it will definitely be a pleasure to reach each title.