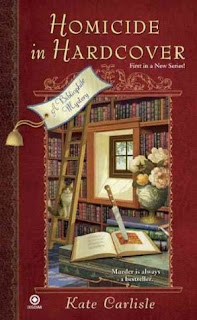 Brooklyn Wainwright is a skilled surgeon. Sure, her patients might smell like mold and have spines made of leather, but no ailing book is going to die on her watch. The same can’t be said of Abraham Karastovsky, Brooklyn’s friend and former employer.

On the eve of a celebration for his latest book restoration, Brooklyn finds her mentor lying in a pool of his own blood. With his final breath Abraham leaves Brooklyn with a cryptic message, “Remember the Devil,” and gives her a priceless—and supposedly cursed—copy of Goethe’s Faust for safe-keeping.

Brooklyn suddenly finds herself accused of murder and theft, thanks to Derek Stone, the humorless—and annoyingly attractive—British security officer who found her kneeling over the body. Now she has to read the clues left behind by her mentor if she is going to restore justice…

Brooklyn Wainright is an expert bookbinder. After finding her mentor and teacher, Abraham Karastovsky, dead she is devastated. More than that, she is determined. Just before Abraham died he said a few words to her and gave her a priceless book, Goethe's Faust. When Abraham's employer, who is also Brooklyn's former boyfriend, asks her to take over the restoration of Faust, she agrees. Meanwhile she is forced to deal with a British security expert, Derek Stone, who both attracts her and annoys her.

At the outset, Derek thinks she might be guilty. His feelings on the matter change rather quickly, especially when he discovers that she plans on checking things out for herself. Meanwhile, Brooklyn is super busy. She has less than a week to restore the book, must fend off attacks while asking one too many questions, and has constant run-ins with Derek.

Brooklyn must also contend with another restorer, Minka. They have been having difficulties for years, and Minka is pushing all of her buttons. Despite Minka's evil nature, there are other great characters in this book, including Brooklyn's best friend Robin and her delightful parents.

This story is told in Brooklyn's first-person's point of view. One bonus to Kate Carlisle's writing style that I enjoyed while reading this book is Brooklyn's side comments to herself. She is so snarky and fun.

Homicide in Hardcover is a wonderful cozy mystery and I am glad to have had a chance to read it. It is the first book in the Bibliophile series. There are currently 13 titles. The latest title is The Book Supremacy, which I have already read. I really enjoyed that book, so I decided to backtrack and read the series from the beginning. Immediately after reading this first book, I then read the second, If Books Could Kill, and have already borrowed the third, The Lies That Bind, from my library.