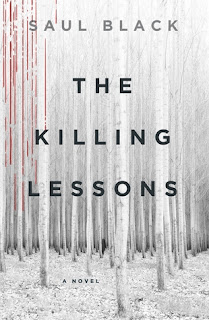 When the two strangers turn up at Rowena Cooper's isolated Colorado farmhouse, she knows instantly that it's the end of everything. For the two haunted and driven men, on the other hand, it's just another stop on a long and bloody journey. And they still have many miles to go, and victims to sacrifice, before their work is done.

For San Francisco homicide detective Valerie Hart, their trail of victims--women abducted, tortured and left with a seemingly random series of objects inside them--has brought her from obsession to the edge of physical and psychological destruction. And she's losing hope of making a breakthrough before that happens.

But the murders at the Cooper farmhouse didn't quite go according to plan. There was a survivor, Rowena's ten-year-old daughter Nell, who now holds the key to the killings. Injured, half-frozen, terrified, Nell has only one place to go. And that place could be even more dangerous than what she's running from.

In this extraordinary, pulse-pounding debut, Saul Black takes us deep into the mind of a psychopath, and into the troubled heart of the woman determined to stop him.
Link to purchase the book

Valerie Hart is a homicide detective from San Francisco and she will stop at nothing to find a serial killer attacking women. The attacks are brutal and have more than one strange signature. Valerie fears for any other woman who might fall into this path.

Two men meet at a farmhouse in Colorado and end up committing a despicable crime, leaving a young child witness to her mother's death. It is quite hopeful that the little girl escape completely, although the tragedy will scar her for life. This is just the first of a long line of violent crimes for the two men.

I admire Valerie Hart. Her determination to bring an end to these killings was admirable. It is no surprise that this places her right in the line of fire. No doubt any future cases that she is responsible for will receive the same dedication.

This debut story by Saul Black is his debut novel. I actually received a print ARC of Anything for You for review, and it is the third book in the Valerie Hart series. Since I wanted to know more about the detective, I chose to read the first book in this series. This may indeed be the darkest book that I have read to-date, as readers are often in the mind of complete psychopaths. Although I have the next book in the series, Lovemurder, I need a break from such intensity.

SAUL BLACK is a pseudonym used by Glen Duncan, a British author born in 1965 in Bolton, Lancashire, England to an Anglo-Indian family. In 1994 he visited India with his father before continuing on to the United States, where he spent several months travelling the country by Amtrak train, writing much of what would become his first novel, Hope, published to critical acclaim on both sides of the Atlantic in 1997. Duncan lives in London. Recently, his 2002 novel I, Lucifer has had the film rights purchased, with actors such as Ewan Mcgregor, Jason Brescia, Jude Law, Vin Diesel, and Daniel Craig all being considered for roles in the forthcoming movie.