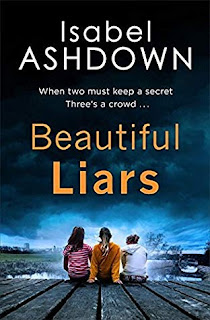 The next morning Juliet's bike was found abandoned at the waterside.

She was never seen again.

Nearly two decades later Martha is a TV celebrity, preparing to host a new crime show... and the first case will be that of missing student Juliet Sherman. After all these years Martha must reach out to old friends and try to piece together the final moments of Juliet's life.

But what happens when your perfect friends turn out to be perfect strangers...?
Link to purchase the book

It has been eighteen years since one of Martha's best friends, Juliet, disappeared on a trail. Martha, now a famous television personality, has just enough influence to prepare a crime show. This pushes her to find out once and for all what happened to Juliet.

More than Martha and Juliet were best friends. There was also Liv, so Martha sends her a letter to ask for her help. Martha is more than pleased that Liv wants to help, especially since they haven't seen each other in all of that time. However, Liv has moved away and another woman receives the letter, and then decides to act as if she is Liv.

Martha and another member of the show, Toby, with the occasional help of a retired cop, begin asking questions. Among other people, Martha locates Juliet's father and the wife of the man suspected of kidnapping Juliet. The deeper Martha digs, unfortunately, the darker things become, so much so that her very life just might soon be threatened.

The prologue leads the reader on a rabbit trail, to be sure. All we know is that a child died at the hands of a sibling, but who was it? As the story jumps right into Juliet's disappearance, this very question stirred in the back of my brain while reading this thrilling book.

There is no surprise as to the name of this book, Beautiful Liars, as there was a large net of doubt cast as to more than one character. Having unreliable and quite nutty characters definitely worked for this book. Things being the way they were most certainly led to sharp twists, along with a few surprises, in this story. It was a compelling read and I love the fact that I was shocked as to who the killer was.

Isabel’s writing career was first launched in 2008, when judges Fay Weldon, Michael Ridpath and the late Sir John Mortimer awarded her first prize in the Mail on Sunday Novel Openings Competition, describing her work as ‘magnificent’.  The novel, Glasshopper (Myriad Editions), went on to be published and was named among the Best Books of 2009 by both the Observer and the London Evening Standard.  Since then, she has written a further five novels and her latest, Beautiful Liars, is out now with Trapeze (Orion Publishing).

She is currently a Royal Literary Fund Fellow at the University of Chichester, where she previously studied as a mature student, gaining a first class BA in English and a masters in Creative Writing with distinction.  She has taught at the University of Brighton and West Dean College, and her essay on the subject of voice features in Writing a First Novel by Karen Stevens (Palgrave MacMillan 2014).


Isabel grew up on the south coast and now lives in West Sussex with her carpenter husband, their two children and their dogs Charlie and Leonard.  Isabel is a member of the Society of Authors.