Review - Dapper Dan: Made in Harlem 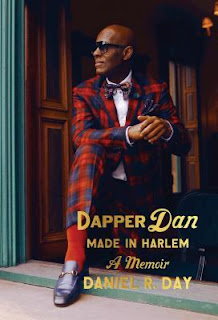 The story of a legendary designer who pioneered high-end streetwear, from a storefront in Harlem to the red carpet in Hollywood, dressing everyone from Salt-N-Pepa and Eric B. & Rakim to Beyoncé and Jay-Z along the way.

With his now-legendary store on 125th Street in Harlem, Dapper Dan pioneered high-end streetwear in the early 1980s, remixing classic luxury-brand logos into his own flamboyant designs. But before reinventing fashion, he was a hungry boy with holes in his shoes, a teen who daringly gambled drug dealers out of their money, a young man in a prison cell who found nourishment in books, and, finally, a designer who broke barriers to outfit a whos-who of music, sport, and crime world celebrities in looks that went on to define an era.

By turns playful, poignant, and inspiring, and featuring two incredible eight-page color photo inserts, including the only existing, never-before-seen images of the notorious Mike Tyson-Mitch Green street fight, Dapper Dan's memoir is a high-stakes coming-of-age story, spanning more than seventy years and set against the backdrop of an ever-evolving America.
Link to purchase the book

Daniel R. Day became known as Dapper Dan. This incredible man became an overwhelming success after decades of fighting on the streets of Harlem. Dapper Dan suffered great poverty and survived as a hustler. He wanted to design clothes. The ideas were many, even if the opportunities were few. Always finding his way into success, while dealing with drugs, credit card fraud and other nefarious activities, he kept his eye on the prize. Despite the many setbacks and constant rejection, Day was a fighter. He made sure to find a way and to rise above his competitors.

What a journey! Day's experiences were a sharp contrast to his creative ideas and amazing intelligence. To learn about his years of great difficulty - which turned out to be the ultimate example of survival - was beyond amazing. Yes, Day is a survivor. There is absolutely no doubt about that. I loved reading this memoir. Maybe because of his outright honesty of his past, his fantastic story kept me glued to the pages.

This compelling read was an eye-opener for me. I even loved how Day got the name Dapper Dan. His references to successful black men and women, as well as how he survived despite overwhelming odds was nothing beyond breathtaking. This story was balanced between light moments and heartbreaking ones.

When doors began opening for Day I applauded. Even when the light didn't remain bright he never lost his focus. I cannot recommend this book enough!

Daniel “Dapper Dan” Day’s work has been displayed at the Smithsonian Institution, The Museum at FIT, the Metropolitan Museum of Art, the Museum of Modern Art, the Museum of the City of New York, and London’s Design Museum. His eponymous boutique was open from 1982 to 1992, and reopened in 2017 in a major partnership with Gucci.