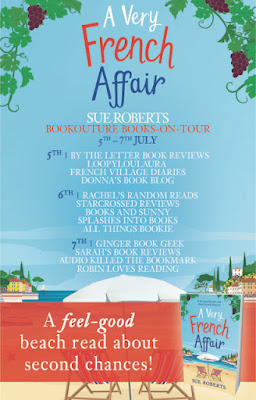 Today is my stop on the Blog Tour for A Very French Affair by Sue Roberts.

DESCRIPTION:
From Southport to the South of France – this is going to be a summer to remember!

Life just got a whole lot more complicated for thirty-eight-year-old single mum Liv. Her son Jake is practically perfect in every way, but he’s started asking some difficult questions, and the answers lie in a holiday romance twenty years ago. Back when Liv was staying with her aunt on the French Riviera…

Returning to the Cote d’Azur, with its white sandy beaches, her supportive aunt, and exquisite wine and cheese is harder than it sounds though. Because – if she’s going to give Jake the answers he needs – Liv knows she has to hunt down her first love Andre. And since she’s a professional baker rather than a professional investigator, she doesn’t even have a clue where to start.

At first, finding the one that got away proves even trickier than she thought. And if she succeeds, how will he take the bombshell secret Liv has been keeping? Liv has to do the best thing for her family, but does that mean closing the door on this very French affair? 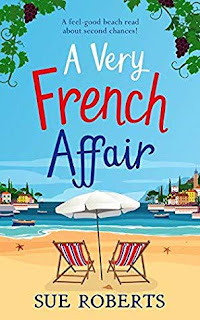 Life is being very good to Olivia. She has given up an unfulfilling teaching job and has opened her own bakery. Liv has also managed to raise a son all on her own, with the aid of her parents. While visiting from university, her son, Jake, comes home a bit disillusioned about his courses. More seriously, he is bemoaning the fact that he never met his father. Liv decides to visit France, where she spent many summers with her Aunt Gen, to try and discover the whereabouts of Jake's father, Andre.

When Liv arrives at her aunt's home and bakery, her first order of business is to help her aunt while she recovers from surgery. However, in the back of her mind she knows she must begin asking around about Andre. It has been twenty years, and she has not seen him since she was eighteen years old. It was a first love for both of them, but during the summer they were together, Andre often told Liv of his desire to travel the world, and that he did.

How is Liv going to find him for Jake? As it happens, she does find Andre. So now the question is, how things will go, not just for Jake and his father, but for Liv and Andre themselves? With the support of friends Faye and Jo, Liv does the best she can to make her son happy. In so doing this gives her a chance to see where her heart, and future, lie.

What a sweet story. As much as this turned out to be a wonderful romance, there was humor included that pushed the story along. It helped to break up the seriousness of the situation of the fact that Liv had to find Andre. There was also a lot of good food in this book! Whether it was baked delicacies or fine French cuisine, it was indeed mouth-watering. I thoroughly enjoyed this book by Sue Roberts and look forward to reading more of her in the future. 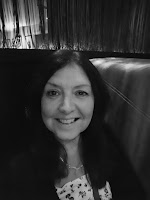 Sue was born in Liverpool and moved to Lancashire as a teenager where she has lived ever since. She has written three books, the third 'My Summer of love and limoncello.' will be published on March 6th and she is busy working on a fourth book. When not busy writing, Sue spends her time with her ever growing family. She enjoys walking, cinema and travelling. Her first book 'My Big Greek Summer.' was inspired by frequent visits to the Island of Rhodes in Greece. All Sue's books are available from Amazon in kindle and paperback format.