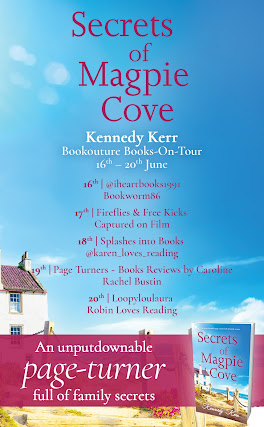 DESCRIPTION:
Lila had a favourite rock to sit on towards the back of the cove, where she often ate her breakfast, gazing out at the tumbling Cornish sea. As the sun rose that morning, Lila wished with all her heart that the grey-green waves could wash away her old life. That Magpie Cove would help her move on, and to forget…

When aspiring pastry chef Lila Bridges flees her life in the city after a heartbreaking tragedy, she finds herself working behind the counter at Magpie Cove’s most beloved local establishment – Serafina’s Café. The sweet, buttery aroma of freshly baked chocolate croissants, the cheerful gossip of the regulars and the elderly owner Serafina’s feisty humour are a much-needed balm to Lila’s broken heart. For the first time since it happened, Lila is beginning to laugh again…

But when Serafina unexpectedly passes away, the future of the café looks bleak. Nathan Da Costa, Serafina’s estranged son, inherits, and returns to Magpie Cove determined to inject some big-city glamour into the place. To Lila, it seems impossible that dour, money-obsessed Nathan could be related to dear Serafina. He may have his mother’s mop of curly dark hair and deep brown eyes, but he has none of her warmth or heart.

Lila needs this job and the sense of peace the town has brought her, so she’s determined to make it work with Nathan as her new boss. But her resolution is tested when the secret Lila has been keeping about what brought her to the cove begins to unravel, just as she discovers an unexpected, sweeter side to Nathan. Will trusting Nathan Da Costa with her long-held secret be Lila’s new beginning in Magpie Cove, or her emotional undoing?

Be totally transported to the windswept beaches of Cornwall with this heart-warming and unputdownable story that will leave a huge smile on your face. Perfect for fans of Shari Low, Veronica Henry and Heidi Swain.
BUY LINKS:
Amazon: https://geni.us/B08XY1W61Psocial
Apple: http://ow.ly/vlFF50DPVb7
Kobo: http://ow.ly/o0c750DPV6m
Google: http://ow.ly/zAXb50DQTeB 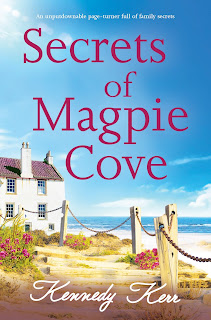 Title:   Secrets of Magpie Cove
Author:  Kennedy Kerr
Series:  Magpie Cove #2
Publisher:  Bookouture
Genre:   Women's Fiction
Format:  Kindle ARC
No. of Pages:   224
Date of Publication:   June 16, 2021
My Rating:   4 Stars
In this highly emotive read, Lila is beset by overwhelming grief. She has sufferend a miscarriage, broken up with her boyfriend and her boss has died. Serafina was much more to a boss to Lila and Lila is desperately grievng her loss. When Serafina's son Nathan comes to sort out his mother's affairs, there is the possibillty that the café might close its doors. Will Lila lose yet again?
Nathan Da Costa is a man about business. That business means making change after change when he comes into town after his mother's death. First order of busines is the café. It is not turning enough profit and he can't see it lasting much longer. However, that is not the only change that Nathan makes, and soon the locals in the small Cornish village have much to grumble about, most of all Lila.
Despite the conflicts that are there from the very start, both Lila and Nathan share an undeniable chemistry. Will they ever act on it or are the changes Nathan is about far too much to overcome? Not only do we have Lila and Nathan's drama, we have other characters in this story that have drama as well. These other characters give strength to an already touching story and their drama proved to be just as compelling than that of Lila and Nathan.
This touching story by Kennedy Kerr deals with some sensitive issues, including grief, the long-term effects after a miscarriage, the things that the elderly can experience like hunger and poverty, acceptance and growth. I truly loved this story and definitely want to read the first book in the series, The House at Magpie Cove, before the next title is released.
Many thanks to Bookouture and to NetGalley for this ARC for review. This is my honest opinion.
ABOUT THE AUTHOR: 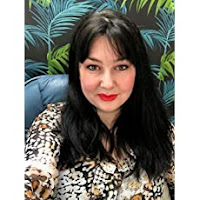 Kennedy Kerr is a British fiction author. She adores beaches, lochs and stone circles, and loves writing about small communities, mysteries and family secrets. She has a very cuddly cat called Twinkle who spends her days sleeping: Kennedy aspires to having Twinkle's nap schedule one day.

Kennedy also loves cooking and baking all types of food, which is almost as much fun as eating it. Her favourite foods include (but are not limited to) Indian food, Victoria sponge, breakfast pastries with coffee and sushi. The only thing she's not particularly keen on is artichoke, and she'd eat it, anyway