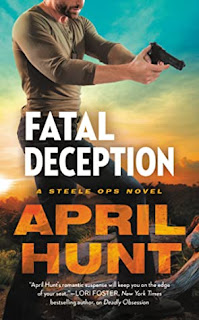 DESCRIPTION:
April Hunt "will keep you on the edge of your seat" (Lori Foster, New York Times bestselling author) in this heart-pounding new romantic suspense.
Roman Steele learned a hard lesson about trusting others. While serving his country, he put his faith in the wrong person and lost a leg for his loyalty. So far, civilian life suits him---as long as he doesn't have to deal with anyone. But when he's called in to investigate a break-in at a high-security lab, he finds himself butting heads with the lead virologist, a woman as infuriating as she is beautiful.
When criminals break into Isabel Santiago's lab and steal a deadly virus, she's desperate to find the culprits before they turn her research into a weapon. But first, she must put her trust in the brooding security expert who sees danger around every corner. As she and Roman race to track down the culprits, these two unlikely partners find there's more at stake for them than they ever imagined possible---but only if they stop the enemy in time.
Link to purchase the book
MY THOUGHTS:
With this story's plot being about a deadly virus that was stolen, it is impossible not to think of current conditions in today's world. Fatal Deception is the exciting third book in the Steele Ops series. April Hunt did not misss a beat with this story, and I love that my attention was snagged from beginning to end.
As has been mentioned, this thrilling book is about a stolen virus. Admittedly not the easiest book to read during a pandenic. No worries, however, as April Hunt is an excellent author who wrote a relatable story, but no fear was instilled in me as I read it. Instead, I was able to enjoy the drama involved in the story, as well as the characters who played their parts.
I so enjoy romantic suspense. In this case with the third of the Steele brothers having a story, I was pleasantly entertained. Whether it was the mystery at hand or the romance developing, the story was well developed and kept my interest from beginning to end.
One thing that made this book so compelling is the fact that both of the primary protagonists, Rowan and Isabel had PTSD and survivor's guilt (trigger warning) in common. Add to the fact that Rowan had previously lost his leg gave these characters fabulous depth, and this only made a good story that much better. Also, the continuity that comes with recurring characters was an extra bonus. I don't know what else is in store for this series, but I cannot wait to find out so that I can read it.