BLOG TOUR - Murder at the Fair 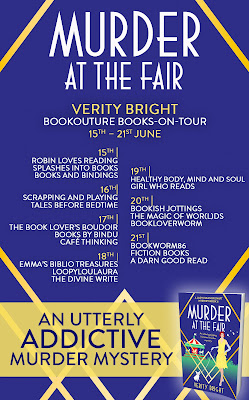 Summer flowers, warm sunshine, a maypole dance and… is that another murder? A tricky case is afoot for Lady Swift!

Summer, 1921. Lady Eleanor Swift, the best amateur sleuth in the country, is delighted to be in charge of the prize-giving at her village summer fair. But the traditional homemade raft race takes a tragic turn when the local undertaker, Solemn Jon, turns up dead amongst the ducks. Jon was the life of any party and loved by the entire village. Surely this was simply an awful accident?

But when a spiteful obituary is printed in the local paper, Eleanor realises there may be more to Jon’s death than first thought. Despite handsome Detective Seldon giving her strict instructions not to interfere, Eleanor owes it to Jon’s good name to root out the truth. So with her partner in crime, Gladstone the bulldog, Eleanor starts digging for clues…

When another local dies in a riding accident, the police refuse to believe he was murdered. But a second vindictive death notice convinces Eleanor of foul play. Solemn Jon’s assistant, a bullish banker and a majestic marquess make her suspect list, but it isn’t until she finds a dusty old photograph that she knows the true culprit behind both crimes. Then another obituary appears – her own! Can Eleanor nail the killer before she too turns up dead among the ducks? 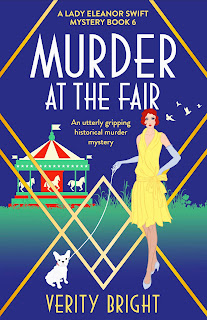 Title:   Murder at the Fair
Author:  Verity Bright
Series:  Lady Eleanor Swift #6
Publisher:  Bookouture
Genre:   Cozy Mystery
Format:  Kindle ARC
No. of Pages:   324
Date of Publication:  June 15, 2021
My Rating:   4 Stars
Lady Eleanor Swift, her trusty butler Clifford and loyal dog Gladstone are at it again. Eleanor is in charge of a village May Day race. As the race is nearly finishing, one of the crafts in the raft race has not returned to the finish line. It is soon discovered that it was manned by Solemn Jon, a local undertaker who is well loved in the village. After a while, a search is underway, and sadly, Solemn Jon's body was discovered.
At first Solemn Jon's death was deemed an accident, but when the obituary is published, Eleanor cannot help do what she does best. She is determined to discover what happened to him. Eleanor is a well-traveled woman, one who has experienced many exciting things. She has since returned home to Henley Hall and should be living the life of a Lady, complete with servants and much more. However, she consistently eschews convention and is quite adept as an amateur detective. Besides the obituary, Solemn Jon's wife appeals to Eleanor to look into her husband's death.
Eleanor knocks heads with Detective Chief Inspector Hugh Seldon (to whom she finds more than attractive) and he tells her to back off. However, after another death occurs, and another odd obituary having been published, Eleanor determinedly looks for clues. This creates problems for Eleanor, as she finds herself in danger yet again.
Not only do we have Eleanor, whom I have come to love as I have read the five previous books in this series, I am enjoying Clifford's role as well. He proves a fine partner for Eleanor. His banter with Eleanor is quite refreshing. I also enjoyed seeing Eleanor's maid Polly in this story as well.
Murder at the Fair is a truly enjoyable addition to this wonderful cozy mystery series. I am really looking forward to the next book, especially as it seems there is a budding romance between Eleanor and DCI Seldon. I would love to see where that goes. But, more importantly, I cannot wait to see what other crimes fall into Eleanor's purview and how she manages to keep herself safe.
Many thanks to Bookouture and to NetGalley for this ARC for review. This is my honest opinon.
ABOUT THE AUTHOR: 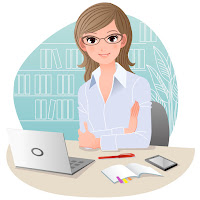 Verity Bright is the pseudonym for a husband-and-wife writing partnership that has spanned a quarter of a century. Starting out writing high-end travel articles and books, they published everything from self-improvement to humour, before embarking on their first historical mystery. They are the authors of the fabulous Lady Eleanor Swift Mystery series, set in the 1920s.
https://twitter.com/BrightVerity