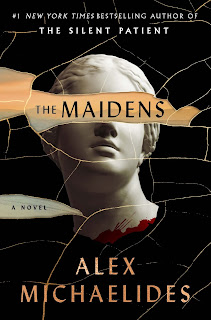 Title:   The Maidens
Author:  Alex Michaelides
Genre:   Psychological Thriller
Publisher:   Celadon Books
Format:  Kindle ARC
No. of Pages:  352
Date of Publication:  May 15, 2021
My Rating:  5 Stars
DESCRIPTION:
Edward Fosca is a murderer. Of this Mariana is certain. But Fosca is untouchable. A handsome and charismatic Greek Tragedy professor at Cambridge University, Fosca is adored by staff and students alike—particularly by the members of a secret society of female students known as The Maidens.
Mariana Andros is a brilliant but troubled group therapist who becomes fixated on The Maidens when one member, a friend of Mariana’s niece Zoe, is found murdered in Cambridge.
Mariana, who was once herself a student at the university, quickly suspects that behind the idyllic beauty of the spires and turrets, and beneath the ancient traditions, lies something sinister. And she becomes convinced that, despite his alibi, Edward Fosca is guilty of the murder. But why would the professor target one of his students? And why does he keep returning to the rites of Persephone, the maiden, and her journey to the underworld?
When another body is found, Mariana’s obsession with proving Fosca’s guilt spirals out of control, threatening to destroy her credibility as well as her closest relationships. But Mariana is determined to stop this killer, even if it costs her everything—including her own life.
Link to purchase the book
MY THOUGHTS:
Does Alex Michaelides hit the ball out of the park with his sophomore book? That elicits a one-word answer from me. Brilliant! I could simply stop writing and say it again. Brilliant.
Greek mythology and a murder mystery. How do the two pair? Any author, especially one relatively new with just their second book, is going to have mixed reviews. After all, reviews are subjective. But we are here for the benefit of my experience with The Maidens. I think as a reader I have gotten a bit too comfortable with audiobooks and text to speech. Although I did receive an audiobook of this ARC, I received a print copy for review first. I did download the audiobook from NetGalley but have not yet found time to listen to it. Why am I bringing this up? Well, I love Kindle text to speech. Using this format allows me to multitask, so sitting down to read a print ARC is not my first choice.
So I came up with a plan. That was to sit in my recliner and to read a hundred pages a day over the course of a few days. Well, that did not happen. In fact, I opened the book and did not move until I read it from cover to cover. To say I was enthralled is an understatement. This book was truly captivating to me, despite the mixed reviews I have perused briefly. As soon as I submit this review I will stop and read at least a few of them.
What grabbed my attention so much with this book? Well, I read The Silent Patient as an early release back in 2019. So I have been more than eager for Alex Michaelides's next book. Then, the plot itself. That captured my attention. A small secret society and the murder of one of the students at Cambridge University.
Our primary protagonist is Mariana, a group therapist who works out of her home. This brings her problems that she must contend with, but before she can sort some of those difficulties out, she receives a phone call from her niece Zoe, who tells her that a classmate has been murdered, and begs Mariana's help. Zoe at first tells her that she thinks her professor Edward Fosca has murdered her friend. What is more is that she alludes to a exclusive group of young women referred to as The Maidens.
Mariana sees those women with her own eyes as she attends the funeral. She sees them walking down the aisles during the funeral in their flowing robes. As she begins to see how these women are connected to Fosca, she becomes worried for Zoe, especially when one of them is soon found murdered.
Admittedly I know nothing of Greek mythology. And the only thing I know about the Greek language are words that I have read in an Interlinear version of the Bible. This story was rich with both, the mythology and language. However, I was not lost. Not once. I love that including both things made this book stand out from The Silent Patient. The author no doubt comfortably used his Cyprus background and smoothly inserted it into this novel. To me, as a reader who always wants to learn, this came highly appreciated. This thrilling story took on a major plot twist, and I simply was not expecting it. In fact, there was even a surprising tie-in to The Silent Patient!
I loved The Maidens and have become a diehard fan of Alex Michaelides. This book has landed in my 2021 list of top reads and no doubt this book will end up in my re-read pile. I cannot wait for his next book and would love to see what direction he takes to see if he writes another thriller of this caliber.
Many thanks to Celadon Books and to NetGalley for this ARC in exchange for my honest opinion.
ABOUT THE AUTHOR: 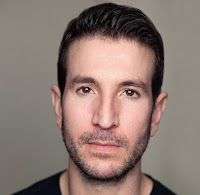 Alex Michaelides was born in Cyprus in 1977 to a Greek father and English mother. He studied English literature at Cambridge University and got his MA in screenwriting at the American Film Institute in Los Angeles. He wrote the film The Devil You Know (2013) starring Rosamund Pike and co-wrote The Brits are Coming (2018), starring Uma Thurman, Tim Roth, Parker Posey and Sofia Vergara. THE SILENT PATIENT is his first novel.