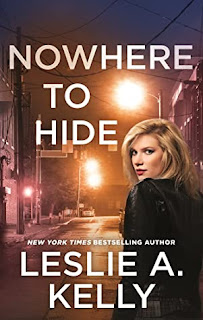 Title:  Nowhere to Hide
Author:  Leslie A. Kelly
Series:  Hollywood Heat #2
Publisher:  Forever
Genre:   Romantic Suspense
Format:  Print ARC
No. of Pages:   400
Date of Publication:   August 25 2020
My Rating:   4 Stars
DESCRIPTION:
No celebrity secret stays buried for long in USA Today bestselling author Leslie A. Kelly's sexy and suspenseful Hollywood Heat series.
A cold case is suddenly too hot to handle
Police officer Rowan Winchester wants nothing to do with his family's A-list Hollywood legacy. Working with the LAPD is his way of atoning for the Winchesters' dark and secretive past. And, right now, the last thing Rowan needs is true-crime novelist Evie Fleming nosing around the most notorious deaths in Los Angeles - including the ones that haunt his own family.
To make things worse, he's torn between wanting the wickedly smart writer out of his city... and just plain wanting her.
While researching her latest book, Evie suspects that a dangerous new killer is prowling the City of Angels. Now she just has to convince the devastatingly handsome cop that she's right. Soon Evie and Rowan are working together to try to find the killer, even as their attraction ignites.
But when the killer hones in on Evie, she and Rowan realize they'll have to solve this case fast if they want to stay alive.
Link to purchase the book
MY THOUGHTS:
People in all walks of life have the potential to hide deadly sectets. For those high in the upper echelon of Hollywood have a potential for dangerous secrets to become exposed. This is what proved to be the cae with Rowan Winchester and his brothers Reece and Rain. The thing is, Rowan wanted nothing to do with the Hollywood lifestyle and got out of it as quickly as he could. In fact, he became a police officer. However, his family legacy held onto him tighter than he would like. Considering that Rowan and his brothers have been hiding a secret for years prove that the reach for exposure proved far and wide.
When true crime novelist Evie Fleming starts digging around deaths in Los Angeles from years ago, this brings her front and center with the Winchester brothers, most notably Rowan. As much as Rowan would like to push Evie away, his is plagued with a strong passion and desire for her that he finds impossible to resist. Could Evie and her questions and intuition be the ruin of his family? Will the pair explore the undeniable attraction they both have for one another, or will the secrets she is unearthing be the undoing of Rowan and his brothers, and any chance of happiness the pair might find?
In this reprint of Wanting You, this second book in the Hollywood Heat trilogy was a fabulous read, one that captured my attention from beginning to end, just as the first book in the series, I'll Be Watching You. I loved both books and cannot wait for the third book to be re-releasead and land in my eager hands. 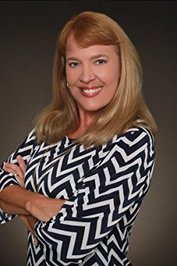