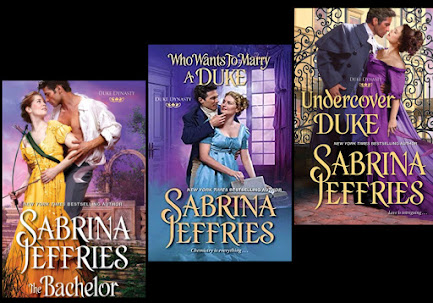 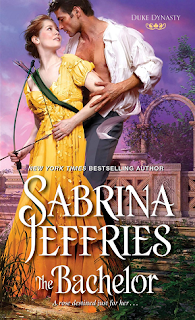 Title:   The Bachelor
Author:  Sabrina Jefferies
Series:  Duke Dynasty #2
Genre:   Historical Romance
Publisher:   Zebra
Format:  Audiobook
No. of Pages:  275
Date of Publication:  February 25, 2020
My Rating:  4 Stars
DESCRIPTION:
New York Times bestselling author Sabrina Jeffries features an irresistible family in a series to savor, as the grown children of a thrice-married dowager duchess piece together the stories of their fathers--while pursuing passions of their own . . .
Lady Gwyn Drake has long protected her family's reputation by hiding an imprudent affair from her youth. But when her former suitor appears at Armitage Hall, manhandling the heiress and threatening to go public with her secrets, it's Gwyn who needs protecting. Her twin brother, Thorn, hires Joshua Wolfe, the estate's gamekeeper, to keep her safe in London during her debut. As a war hero, Joshua feels obligated to fulfill the assignment he has accepted. But as a man, it's torment to be so very close to the beauty he's fought to ignore . . .
With handsome Joshua monitoring her every move, Gwyn would prefer to forget both the past and the parade of money-seeking bachelors at her coming out. But Joshua is unmoved by her attempts at flirtation, and the threat of blackmail still hangs over her. With danger closing in, Gwyn must decide which is the greater risk: deflecting a scoundrel's attempts to sabotage her--or revealing her whole heart to the rugged bodyguard she can't resist . . .
Link to purchase the book
MY THOUGHTS:
Lady Gwyn Drake is finally having her debut. At the age of thirty. What is more is she is being blackmailed. As Gwyn faces danger one day Major Joshua Wolfe comes to her rescue. Joshua was of the Royal Marines, and a duke's grandson and is acting as gamekeeper at Armitage Hall. Will Joshua be able to thwart someone from Gwyn's past and keep her safe during her debut? That is what Joshua is tasked to do by Gwyn's twin brother Thorn.
Joshua may be recovering from an injury which causes him a bad limp, but he proves to be the perfect man to keep Gwyn in line - as if anyone could really do that. While it is clear that both Joshua and Gwyn share a powerful attraction, the danger facing Gwyn is always at bay.
The Bachelor is the delightful second book in the Duke Dynasty series and is a very nice ronmance mixed iwth a bit of suspense.
------ 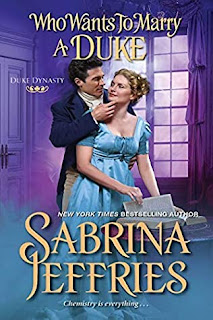 Title:   Who Wants to Marry a Duke
Author:  Sabrina Jefferies
Series:  Duke Dynasty #3
Genre:   Historical Romance
Publisher:   Zebra
Format:  Audiobook
No. of Pages:  352
Date of Publication:  August 25. 2020
My Rating:  4 Stars
DESCRIPTION:
A sexy and distracting rake is tamed by a scholarly heroine with a penchant for the sciences in this dazzling and witty tale of Regency London.
A past kiss with adorably bookish Miss Olivia Norley should be barely a memory for Marlowe Drake, the Duke of Thornstock. After all, there are countless debutantes for a handsome rakehell to charm beyond a young lady whose singular passion is chemistry—of the laboratory type. But Thorn has not forgotten—or forgiven—the shocking blackmail scheme sparked by that single kiss, or the damage caused to both their names. Now Thorn’s half-brother, Grey, has hired the brilliant Miss Norley for her scientific expertise in solving a troubling family mystery. And the once-burned Thorn, suspicious of her true motives, vows to follow her every move . . .
For Olivia, determining whether arsenic poisoning killed Grey’s father is the pioneering experiment that could make her career—and Thorn’s constant presence is merely a distraction. But someone has explosive plans to derail her search. Soon the most unexpected discovery is the caring nature of the reputed scoundrel beside her—and the electricity it ignites between them . . .
Link to purchase the book
MY THOUGHTS:
Nine years previously, Miss Olivia Norley was involved in a blackmail scheme involving the Marlowe Drake, the Duke of Thornstock. His half-brother, the Duke of Greycourt, Grey, has hired Olivia to further investigate the death of his father years previously. Olivia, far from convention, is a chemist, and is not pleased to be in the company of Thorn.
The three Dukes - Grey, Thorn and Sheridan - half-brothers, have all lost their fathers (who were Dukes) under suspicious circumstances. Olivia and Thorn have a shared history involving a kiss niether of them has ever forgotten. Thrown together once again as it begins to seem that all of the previous Dukes might have in fact been murdered, make this third entry in the Duke Dynasty series an intriguing novel.
Not surprisingly, Olivia and Thorn soon realize that they can no longer fight the pull of attaction between them, despite the serious nature of discovering the truth that involves Olivia's broad knowledge of science.
------ 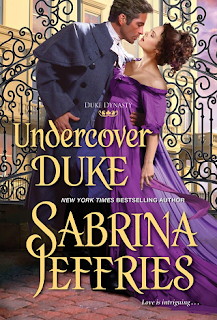 Title:   Undercover Duke
Author:  Sabrina Jefferies
Series:  Duke Dynasty #4
Genre:   Historical Romance
Publisher:   Zebra
Format:  Kindle ARC
No. of Pages:  352
Date of Publication:  May 25, 2021
My Rating:  4 Stars
DESCRIPTION:
Bridgerton fans and readers of Madeline Hunter, Eloisa James, and Lisa Kleypas won’t want to miss this humorous and clever new love story from the historical romance legend.
Along with his stepsiblings, Sheridan Wolfe, Duke of Armitage, is determined to finally solve the mysteries behind the suspicious deaths of their mother’s three husbands. Tasked with investigating a possible suspect, Sheridan finds himself in dangerous proximity to her captivating daughter, Vanessa Pryde. But still haunted by a tragically lost love, the duke is resolved to resist the attraction—and avoid any “scheming” husband-hunters. Besides, lovely Miss Pryde seems utterly smitten with a roguish London playwright...
Vanessa thinks a little scheming may be in order—for it’s Sheridan she truly has her sights, and her heart, set on. Her theatrical flirtation is intended only to break through his business-like demeanor and guarded emotions. And as Sheridan’s jealousy becomes aroused, the two soon find themselves propelled into a scheme of an altogether different kind, involving a pretend engagement, a secret inquiry—and a perhaps not-so-secret leap into true love...
Link to purchase the book
MY THOUGHTS:
As this fabulous series by Sabrina Jeffies concludes, investigatons involving the deaths of three Dukes by their sons, half-brothers, Grey, Thorn and Sheridan, are getting closer than ever to the truth of what happened to their fathers. Their mother has been widowed three times over and this is now Sheridan's story.
Each of the brothers played a role when it came to trying to seek the truth. Sheridan is tasked with investigating Vanessa Pryde, a possible suspect. This is complicated by the fact that Sheridan is quite drawn to Vanessa and finds it near to impossible to resist her. However, it seems that Vanessa has set her sights elsewhere and both she and Sheridan strike a deal to make her apparent love interest jealous.
Things are not as they seem, however. In fact, both Vanessa and Sheridan have ultimate motives, especially Vanessa. I loved her scheming ways when it came to landing the man who truly captured her heart, all while she was more the subject of a secret investigation.
Oh the twists in this delightful story! As sexy as it was intriguing, Undercover Duke was my favorite book in this series and I am sad to see this series come to a close.
Many thanks to Zebra and to NetGalley for this ARC to review in exchange for my honest opinion.

Sabrina Jeffries is the New York Times bestselling author of more than 50 novels and works of short fiction (some written under the pseudonyms Deborah Martin and Deborah Nicholas).

At home in front of a crowd, Jeffries is a sought-after speaker, as evidenced by her 2010 gig as emcee for the National Romance Writers of America’s 30th Anniversary Awards Ceremony.

Whatever time not spent speaking to organizations around the country or writing in a coffee-fueled haze is spent traveling with her husband and adult autistic son or indulging in one of her passions—jigsaw puzzles, chocolate, and music.

With over 9 million books in print in more than 20 languages, the North Carolina author never regrets tossing aside a budding career in academics (she has a Ph.D. in English literature) for the sheer joy of writing fun fiction, and hopes that one day a book of hers will end up saving the world.