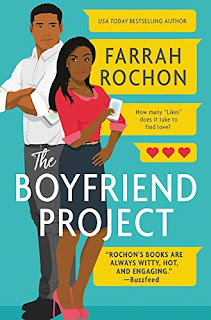 Title:   The Boyfriend Project
Author:  Farrah Rochon
Series:  The Boyfriend Project #1
Publisher:  Forever
Genre:   Romance
Format:  Kindle ARC
No. of Pages:   368
Date of Publication:   June 9, 2020
My Rating:   3 Stars
DESCRIPTION:
Samiah Brooks never thought she would be "that" girl. But a live tweet of a horrific date just revealed the painful truth: she's been catfished by a three-timing jerk of a boyfriend. Suddenly Samiah-along with his two other "girlfriends," London and Taylor-have gone viral online. Now the three new besties are making a pact to spend the next six months investing in themselves. No men, no dating, and no worrying about their relationship status . . .
For once Samiah is putting herself first, and that includes finally developing the app she's always dreamed of creating. Which is the exact moment she meets the deliciously sexy, honey-eyed Daniel Collins at work. What are the chances? When it comes to love, there's no such thing as a coincidence. But is Daniel really boyfriend material or is he maybe just a little too good to be true?
Link to purchase the book
MY THOUGHTS:
When three friends swear off men for six months, things certainly have a way of upsetting even the best-laid plans. For Sam, London and Taylor, the project they begin takes on unexpected proportions. Victims of catfishing, they come up with a plan that surprisingly goes viral.
Considering the busy lifetime these ladies have, a newly formed friendship hardly seems timely. However, a pact formed with victim's of previous boyfriend Craig certainly changes that. However, for Sam, rejecting the perfect guy - Daniel - proves to be a challenge she was not prepared for. What about the pact? Is Sam giving up that quickly? This enjoyable romantic comedy was a hoot with characters that were pretty much easy to like and the drama and conflicts worked out just right.
Many thanks to Forever and to NetGalley for this ARC for review. This is my honest opinion.

A native of south Louisiana, USA Today Bestselling author Farrah Rochon officially began her writing career while waiting in between classes in the student lounge at Xavier University of Louisiana. After earning her Bachelor of Science degree from Xavier and a Masters of Arts from Southeastern Louisiana University, Farrah decided to pursue her lifelong dream of becoming a published novelist. She was named Shades of Romance Magazine's Best New Author of 2007. Her debut novel, Deliver Me, the first in her Holmes Brothers series, garnered rave reviews, earning Farrah several SORMAG Readers' Choice Awards.
Farrah is a two-time finalist for Romance Writers of America's RITA Award and has been a Romantic Times Book Reviews Reviewer's Choice Award nominee. In 2015, Farrah won the Emma Award for Author of the Year.
When she is not writing in her favorite coffee shop, Farrah spends most of her time reading, traveling the world, hanging around on Twitter, visiting Disney World, and trying to attend as many Broadway shows as her budget will allow. An admitted sports fanatic, Farrah feeds her addiction to football by watching New Orleans Saints games on Sunday afternoons.
Farrah is represented by Evan Marshall of the Evan Marshall Literary Agency.
web | twitter