Review - The Pillars of the Earth 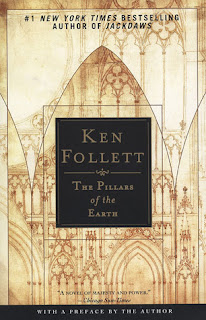 Title:  The Pillars of the Earth
Author:  Ken Follett
Series:  Kingbridge #1
Publisher:  NAL Trade
Genre:   Historical Fiction
Format:  Audiobook
No. of Pages:   976
Date of Publication:   October 1989
My Rating:   5 Stars
DESCRIPTION:
Ken Follett is known worldwide as the master of split-second suspense, but his most beloved and bestselling book tells the magnificent tale of a twelfth-century monk driven to do the seemingly impossible: build the greatest Gothic cathedral the world has ever known.
Everything readers expect from Follett is here: intrigue, fast-paced action, and passionate romance. But what makes The Pillars of the Earth extraordinary is the time the twelfth century; the place feudal England; and the subject the building of a glorious cathedral. Follett has re-created the crude, flamboyant England of the Middle Ages in every detail. The vast forests, the walled towns, the castles, and the monasteries become a familiar landscape.
Against this richly imagined and intricately interwoven backdrop, filled with the ravages of war and the rhythms of daily life, the master storyteller draws the reader irresistibly into the intertwined lives of his characters into their dreams, their labors, and their loves: Tom, the master builder; Aliena, the ravishingly beautiful noblewoman; Philip, the prior of Kingsbridge; Jack, the artist in stone; and Ellen, the woman of the forest who casts a terrifying curse. From humble stonemason to imperious monarch, each character is brought vividly to life.
The building of the cathedral, with the almost eerie artistry of the unschooled stonemasons, is the center of the drama. Around the site of the construction, Follett weaves a story of betrayal, revenge, and love, which begins with the public hanging of an innocent man and ends with the humiliation of a king.
Link to purchase the book
MY THOUGHTS:
I read this amazing book as part of a group read where we discussed this book just about daily. I now want to read the other books in the series. I had not read anyting by Ken Follett before and now he is an author that I definitely want to explore.

Although this book was nearly a thousand pages, it was easy to stay focused on the story. We only read s few chapters daily, and I kept on reading book after book that were in my queue. Yet, the story was told so very well that I was utterly captivated. Even if I took a day or two away while reading other books, I was never lost in this captivating book.

The characters were absolutely amazing - whether likeable or despicable. As this book was set in the 12th century there was much to be learned while reading of this time in history. I have every intention on reading the other books in the Kingsbridge series as this author has taken his skill of writing and extensive research and provided me with a memorable experience.

The basis of the story was about the building of a cathedral. However, it was much, much more. The story told of relationships, tragedy, violence and love. The story touched on some heavy topics and incredible tragedy and loss. The Pillars of the Earth was a stunning read and I will soon move on to the second book, World Without End, another tome that I am certain will be just as intriguing.
ABOUT THE AUTHOR: 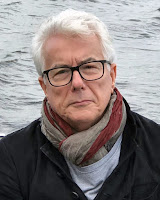 Ken Follett is one of the world’s most successful authors. Over 178 million copies of the 36 books he has written have been sold in over 80 countries and in 33 languages.
Born on June 5th, 1949 in Cardiff, Wales, the son of a tax inspector, Ken was educated at state schools and went on to graduate from University College, London, with an Honours degree in Philosophy – later to be made a Fellow of the College in 1995.
He started his career as a reporter, first with his hometown newspaper the South Wales Echo and then with the London Evening News. Subsequently, he worked for a small London publishing house, Everest Books, eventually becoming Deputy Managing Director.
Ken’s first major success came with the publication of Eye of the Needle in 1978. A World War II thriller set in England, this book earned him the 1979 Edgar Award for Best Novel from the Mystery Writers of America. It remains one of Ken’s most popular books.
In 1989, Ken’s epic novel about the building of a medieval cathedral, The Pillars of the Earth, was published. It reached number one on best-seller lists everywhere and was turned into a major television series produced by Ridley Scott, which aired in 2010. World Without End, the sequel to The Pillars of the Earth, proved equally popular when it was published in 2007.
Ken’s new book, The Evening and the Morning, was published in September 2020. It is a prequel to The Pillars of the Earth and is set around the year 1,000, when Kingsbridge was an Anglo-Saxon settlement threatened by Viking invaders.
Ken has been active in numerous literacy charities and was president of Dyslexia Action for ten years. He was chair of the National Year of Reading, a joint initiative between government and businesses. He is also active in many Stevenage charities and is President of the Stevenage Community Trust and Patron of Home-Start Hertfordshire.
Ken, who loves music almost as much as he loves books, is an enthusiastic bass guitar player. He lives in Stevenage, Hertfordshire, with his wife Barbara, the former Labour Member of Parliament for Stevenage. Between them they have five children, six grandchildren and two Labradors.
web | twitter | facebook | instagram