Review - The End of Her 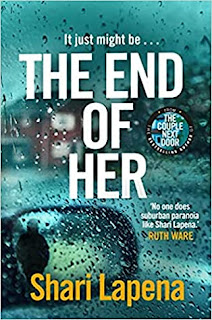 Title:  The End of Her
Author:  Shari Lapena
Genre:  Mystery/Thriller
Publisher:  Bantam Press
Format:  Kindle ARC
No. of pages: 352
Published:  July 20, 2020
My Rating: 4 Stars
DESCRIPTION:
It starts with a shocking accusation...
Stephanie and Patrick are recently married, with new-born twins. While Stephanie struggles with the disorienting effects of sleep deprivation, there’s one thing she knows for certain – she has everything she ever wanted.
Then a woman from his past arrives and makes a shocking accusation about his first wife. He always claimed her death was an accident – but she says it was murder.
He insists he’s innocent, that this is nothing but a blackmail attempt. But is Patrick telling the truth? Or has Stephanie made a terrible mistake?
How will it end?
You never really know what people are capable of.
Link to purchase the book
MY THOUGHTS:

Life was just perfect for Stephanie. She has a loving husband named Patrick and newborn twins. Sacraficing sleep is the worst of her troubles. Or at least she thought so. Enter Erica, a woman from Patrick's past. She drops a bombshell on Stephanie. She has accusations against Patrick concerning his first wife. Did Patrick have everything to do with her death and is Stephanie going to one day meet the same fate?
Erica has a story to tell and Stephanie will listen. Erica makes sure of that whether or not Stephanie is keen to listen. She insists that Patrick murdererd his first wife. But there is more. She tells Stephanie that she is having an affair with Patrick. A way to put a pin in the balloon that is Stephanie's life.
What is Stephanie to do? Well, her options are few because Erica has a plan. A plan mired deeply in blackmail or she will go to the police and have the murder case reopened. If that is not bad enough, Erica has more plans. Ruining two lives is not enough. How about two other couples? What happens is in Stephanie's hands. Either she pays Erica the blackmail money or everything will fall apart around them.
Does Stephanie have enough strength to fight Erica? What about her relationship with Patrick? Drama, relationshps, betrayal, lies, threats and danger are all part of the excellently execute plot that Shari Lapena delivers to her readers. As is par for the course for Ms. Lapena, The End of Her was a fabulous read.
Many thanks to Bantam Books and to NetGalley for this ARC to review in exchange for my honest opinion.
ABOUT THE AUTHOR:

SHARI LAPENA  is the internationally bestselling author of The Couple Next Door and A Stranger in the House. She was a lawyer and an English teacher before turning her hand to fiction.
She lives in Toronto.
Web / Facebook / Twitter