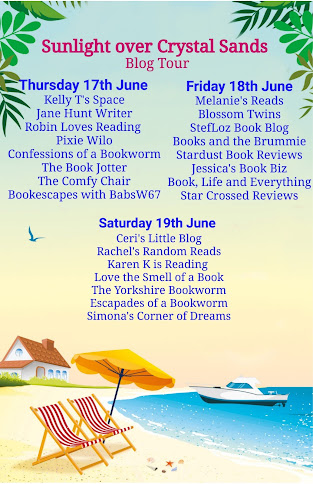 DESCRIPTION:
Love is in the air on the sun kissed sands of the Cornish coast, where the sea sparkles and romance sizzles on golden beaches. This stunning new novel by Holly Martin, bestselling author of Ice Creams at Emerald Cove, is guaranteed to steal your heart this summer.
Lyra Thomas has dreamed of living on Jewel Island ever since she first visited its breathtaking shores. And now her dream has come true – she has her own little cottage and a brand new job. But when Lyra sets out for a bike ride to explore her new home, a mishap has her crash-landing at the feet of the very handsome Nix Sanchez.
A true gentleman, Nix comes to Lyra’s rescue. His face is so familiar and yet they are strangers. But the more they talk, Lyra feels as though she has known Nix forever. What follows is the most magical night of Lyra’s life… until the spell is broken when the next morning she finds Nix has gone.
Feeling foolish Lyra vows to be more careful with her heart from now on. She’ll pretend Nix never existed. But destiny has other ideas and in a perfect twist of fate Lyra will discover that Nix Sanchez is impossible to forget…
Escae to sundrenched Jewel Island this summer where love, laughter and the thrill of adventure await. This gorgeous, romantic, feel-good read is perfect for fans of Sophie Kinsella, Jill Mansell and Sue Moorcroft.
Link to purchase the book 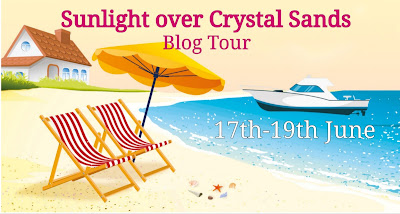 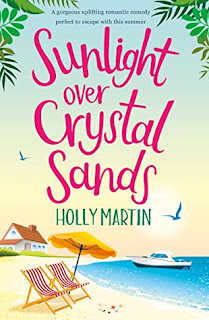 Title:   Sunlight Over Crystal Sands
Author:  Holly Martin
Series:  Jewel Island #4
Genre:   Romance
Format:  Kindle ARC
No. of Pages:   320
Date of Publication:   June 16, 2021
My Rating:   4 Stars
MY THOUGHTS:
Lyra Thomas does not do one-night stands. However, that is exactly what happens with Nix Sanchez. But, will one night be enough? They share an amazing connection, one almost too good to be true. But, despite how quickly Lyra's heart is snagged by the handsome stranger, she experiences almost an immediate heartbreak. Sadly for Lyra, Nix apparently does not feel the same because he ran. Gone.
What brings them back together? Will the things Lyra feels for Nix be enough for him to perhaps feel the same? Striving to put Nix out of her mind, Lyra tries to remember why she is on Jewel Island to begin with. Living on the island has been her lifelong dream and now she has the job of her dreams and a beautiful cottage so she does her best to stop thinking about Nix.
Did Nix walk - or run - away? If so, why? When he finds himself working with Lyra on a daily basis, and with her giving him the cold shoulder, Nix begins to feel regret about the way things were left. Does Nix have baggage that prevented him from giving rise to hope of a happy future with someone he is incredibly drawn to?
If I had a bucket list, Jewel Island would be on it. I love revisiting this stunning place as I read each book in this engaging series. This beautiful setting lends toward a beautiful story with warm characters and brings in a bit of adventure, as well as continuity from other books in the series.
Many thanks to Holly Martin for this ARC for review. This is my honest opinion.
ABOUT THE AUTHOR: