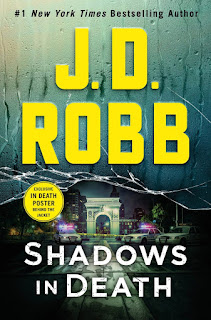 Title:  Shadows in Death
Author:  J. D. Robb
Series:  In Death #51
Publisher:  St. Martin's Press
Genre:  Mystery/Thrillers
Format:  Kindle ARC
Date of Publication:  September 8, 2020
No. of Pages:  355
My rating:  5 Stars
DESCRIPTION:
Lt. Eve Dallas is about to walk into the shadows of her husband's dangerous past.
As it often did since he'd married a cop, murder interrupted more pleasant activities. Then again, Roarke supposed, the woman lying in a pool of her own blood a few steps inside the arch in Washington Square Park had a heftier complaint.
When a night out at the theatre is interrupted by the murder of a young woman in Washington Square Park, it seems like an ordinary case for Detective Eve Dallas and her team. But when Roarke spots a shadow from his past in the crowd, Eve realises that this case is far from business as usual.
Eve has two complex cases on her hands - the shocking murder of this wealthy young mother and tracking down the shadow before he can strike again, this time much closer to home. Eve is well used to being the hunter, but how will she cope when the tables are turned? As Eve and the team follow leads to Roarke's hometown in Ireland, the race is on to stop the shadow making his next move . . .
Link to purchase the book
MY THOUGHTS:
In what just might be my favorite series, Shadows in Death, the 51st book in the In Death series begins with Lieutenant Eve Dallas and husband Roarke enjoying a night at the theater. Their pleasant night is interrupted when Eve is called to yet another crime scene. Not only is Roarke invested in the very theater they are enjoying, he often acts as a consultant on Eve's cases. As a billionaire who owns most of everything it seems, many of the crimes that Eve investigates end up needed Roarke's expertise.
I discovered this series late in 2019 and have read every book, including the upcoming 53rd book in the series, Forgotten in Death. Eve is the most intrepid heroine I have come across in any novel I have read. She has a strength unrivalled by any, which include wit, intelligence and a softer side she would rather hide. Then there is the humor Eve displays, often quite unintentionally. I love how others have to explain things to her while even though her adeptness as solving crimes makes her one of the best detectives ever.
Another thing. The fact that this is a futuristic series. This book is set in 2061, so there are some nice nuances to this detective series. In fact, I love how that edge of future technology is woven into this story. Shadows in Death touched on Roarke's past, as have other books in this series have done. Meanwhile, the story also shows the incredible connection between Eve and Roarke, but also that of Eve and her workmates. To say that she is my favorite character of all time pretty much goes without saying.
Many thanks to St. Martin's Press and to NetGalley for this ARC for review. This is my honest opinion.
ABOUT THE AUTHOR: