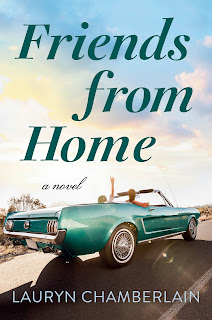 Title:  Friends from Home
Author:  Lauryn Chamberlain
Publisher:  Dutton Books
Genre:   Women's Fiction
Format:  Kindle ARC
No. of Pages:   304
Date of Publication:   May 18, 2021
My Rating:   4 Stars
DESCRIPTION:
Jules O'Brien and Michelle Davis have been best friends since third grade, when Jules and her single mother moved from Cleveland to the small Alabama town where Michelle's family has lived for generations.
Now in their mid-twenties, the childhood friends live miles and worlds apart. When Jules agrees to be the maid of honor in Michelle's wedding, she quickly realizes just how different the two have become. Over the years, their passions and politics have diverged, and in the middle of wedding planning squabbles, they feel more like strangers than the sisters they once were. When their friendship reaches a breaking point, Jules will have to decide if the bond they once had as girls is strong enough to reunite the women they've become. Is shared history enough to carry their friendship through a lifetime?
Disarming and wildly relatable, this novel is perfect for anyone who knows the complex love we have for our friends from home. It will have you calling the Michelle to your Jules immediately to discuss.
Link to purchase the book
MY THOUGHTS:
While reading Friends from Home the idiom you can't go home again stayed ever-present in my mind. When Jules O'Brien and Michelle Davis met in third grade, they became closer than sisters, best best friends, and imagined being friends forever. Adults now, they are not only separated by miles, but also by the worlds they live in. Michelle is getting married and she and Jules begin spending a lot of time together as wedding preparations begin. However, the more time Jules spends with Michelle, the more she realizes how different they have become and is often beset with feelings of sadness and loneliness.
Jules has other serious issues. A difficult relationship with her single mother and completely estranged from her father. Also, money meant completely different things to them as children and even now as adults. Jules always struggled, and Michelle had everything Jules ever wanted. She is in a good relationship with boyfriend Mark but when Jules is around Michelle she does get those sad feelings. The more time they spend together the more they drift apart. In fact, everything they knew as children did not carry into their adulthood.
Friends from Home is a highly emotive read, one which kept my heart in a vice from the beginning. In fact, I couldn't help but think of the different relationships I have had in my life and pondered what has happened with different friendships. I think the way this book was penned gave rise to those thoughts within me. The balance of reminiscing about the past while exploring current changes was something that was seen throughout Jules eyes in this story. Michelle was wrapped up in her loving relationship and impending marriage.
This was a wonderful book that did include a very sensitive subject, so sensitive that it might prove to the catalyst for Jules and Michelle losing everything they once had. Lauryn Chamberlain's debut novel will keep me thinking for a long while and will no doubt resonate in the hearts of many. I have heaed throough the grapevine that Ms. Chamberlain has signed a two-book deal, so I am more than eager to see where this emotional and contemplative story goes from here.
Many thanks to Dutton Books and to NetGalley for this ARC for review. This is my honest opinion.

Lauryn Chamberlain was born and raised in Michigan. She studied journalism and French at Northwestern University and then moved to New York City, where she worked for several years as a journalist, freelance writer, and content strategist (sometimes simultaneously). She currently lives in Toronto.
web | twitter