THE BLOG TOUR - The Beach House 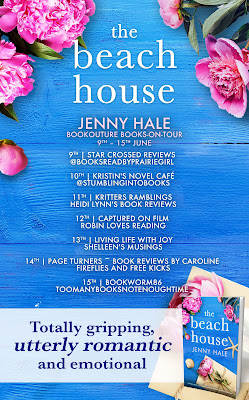 DESCRIPTION:
An absolutely gorgeous and heartwarming read about finding love where you least expect it, new beginnings, and how family is always with you, no matter where you are. Fans of Susan Mallery, Pamela Kelley, and Mary Alice Monroe will adore this romantic page-turner.

When her gram passes away, Melanie Simpson feels utterly lost. But her grandmother’s will gives her a purpose: an inheritance to buy a crumbling house in Rosemary Bay. They used to visit the village every summer, sit by the sparkling water on a beach the color of pearl, and daydream about turning the place on the corner into a bed and breakfast.

On her first night in her new hometown, Melanie meets local contractor and landowner Josh Claiborne, whose eyes match the dazzling sea. Melanie plans to restore the beach house to its original glory, and Josh is the perfect person to help renovate the wrap-around porch weathered by the coastal breeze and the peeling white paint faded by the sun.

But hiding in a closet is a yellowing stack of letters that could change everything. The looping handwriting reveals the mystery of the rickety house—a buried history that touches everyone in Rosemary Bay. Will its secrets bring Melanie and Josh together or tear them apart?
BUY LINKS:
Amazon: https://geni.us/B09169WS24social
Apple: http://ow.ly/WlVQ50EaUuo
Kobo: http://ow.ly/j9g950EaUnw
Google: http://ow.ly/Mwhr50EaUy6 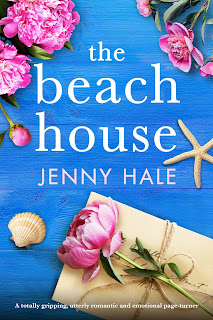 Title:   The Beach House
Author:  Jenny Hale
Publisher:  Bookouture
Genre:   Women's Fiction; Romance
Format:  Kindle ARC
No. of Pages:   300
Date of Publication:   June 9, 2021
My Rating:   4 Stars
When Melanie Simpson discovers a box of letters at a house she bought with hopes of turning it into a bed and breakfast, she discovers secrets that were buried long ago. Her beloved grandmother has passed away. Melanie took care of her for a few years before her death and the two became quite close. Her grandmother left her an inheritance and this led to Melanie buying a house in Rosemary Bay per her grandmother's request.
The house is falling apart and is in need of more than a bit of work. The residents of Rosemary Bay say that there is one man perfect for the job, and that is Josh Claiborne. However, there are some hiccups. For one thing, Josh is set to leave for New York in a week's time. What is more is that he is diehard set against offering any assistance, and proves to be bitter to the core.
While out for drinks, Josh loses a game of darts. His price? To offer at least a quote and recommendations for the dilapidated house Melanie has purchased. The two have a strong chemistry. Of that there is no doubt. However, Josh proves quite harsh any time he is around Melanie. Why the contradiction? What does it really matter anyway, as Josh will soon be moving away?
Meanwhile, Melanie has the stack of letters that she has discovered. These letters hold clues to a past that in some way connect Melanie and Josh. However, the more letters she reads, the more conflict is raised in Josh. Why is this so? What is the connection of the letters, Melanie's grandmother, Josh and the person who actually wrote the letters?
I so loved this book! Both Melanie and Josh were wonderful characters and I really wanted them to find love, despite the obstacles that faced them. I also loved how strong Melanie was for her grandmother, even though her grandmother was not actually in this story. But, it was easy to see their strong connection. Meanwhile, as the story itself started, there was something that occurred that was truly heartbreaking, and it was this very event that just might ultimately tie Melanie and Josh together. The Beach House was a touching, memorable read of two souls find a chance at love and dealing with the obstacles that could lead to broken hearts. Instead, fighting those battles led to a wondefullly happy ending,
Msny thanks to Bookouture and to NetGalley for this ARC for review. This is my honest opinion.
ABOUT THE AUTHOR: 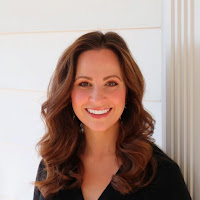 Jenny Hale is a USA Today, Amazon, and international bestselling author of romantic contemporary fiction. Her books have sold worldwide, have been translated into multiple languages, and adapted for television. Her novels Coming Home for Christmas and Movie Guide Epiphany Award winner Christmas Wishes and Mistletoe Kisses are Hallmark Channel original movies.

She was included in Oprah Magazine's "19 Dreamy Summer Romances to Whisk You Away" and Southern Living's "30 Christmas Novels to Start Reading Now." Her stories are chock-full of feel-good romance and overflowing with warm settings, great friends, and family. Jenny is at work on her next novel, delighted to be bringing even more heartwarming stories to her readers.

When she isn't writing, or heading up her romantic fiction imprint Harpeth Road, she can be found running around her hometown of Nashville with her husband, two boys, and their labradoodle, taking pictures--her favorite pastime.