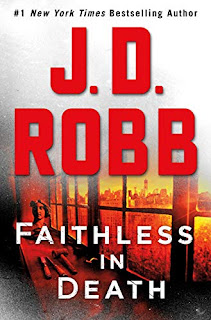 Title:  Faithless in Death
Author:  J. D. Robb
Series:  In Death #52
Publisher:  St. Martin's Press
Genre:  Mystery/Thrillers
Format:  Kindle ARC
Date of Publication:  February 9, 2021
No. of Pages:  400
My rating:  5 Stars
DESCRIPTION:
In the new Eve Dallas police thriller from #1 New York Times-bestselling author J. D. Robb, what looked like a lover's quarrel turned fatal has larger--and more terrifying--motives behind it...
The scene in the West Village studio appears to be classic crime-of-passion: two wine glasses by the bed, music playing, and a young sculptor named Ariel Byrd with the back of her head bashed in. But when Dallas tracks down the wealthy Upper East Side woman who called 911, the details don't add up. Gwen Huffman is wealthy, elegant, comforted by her handsome fiancé as she sheds tears over the trauma of finding the body--but why did it take an hour to report it? And why is she lying about little things?
As Eve and her team look into Gwen, her past, and the people around her, they find that the lies are about more than murder. As with sculpture, they need to chip away at the layers of deception to find the shape within--and soon they're getting the FBI involved in a case that involves a sinister, fanatical group and a stunning criminal conspiracy.
Link to purchase the book
MY THOUGHTS:
This series has made it to #52 with this entry! In fact, #54 is scheduled and I have already read #53 Forgotten in Death. There is a split opinion about series. Many think trilogies is a good fit. Some perhaps will accept ten books, but this one has over 50, so some people will think the stories might recycle. Get stale. Well, that is not the case with this series and this title.
Yes, we have our audacious detective Lieutenant Eve Dallas and her richer than sin husband Roarke. We also have Roarke's major-domo Summerset, some of Eve's workmates, like partner, Peabody, or Captain Feeney, or Commander Whitney, amont others. I especially love Dr. Mira, police consultant and close friend and confidant to Eve. In fact, just about every character has a freshness to them no many how many books come out in this series.
In this story, Eve is investigagting the homicide of a young female artist. It doesn't take Eve long to see that the woman was tied to a cult-like religious organization. When Eve goes to interview the woman who phoned in the 911 call, Gwen Huffman, it takes her less than a minute to know things do not add up. In fact, as Eve starts to uncover things about the cult there in New York City, she discovers that its tentatacles reach far wider.
This book definitely hits on some tough subjects, inclding the cult, but also, homophobia, sexual assault and domestic violence. However, as this book is excellentlt written, these subjects are handled with aplomb.
As always this story reminds readers of the strong bonds of love between Eve and Roarke and how well suited they are to each other. Also, by now Roarke has pretty much has a carte blanche position when it comes to Eve's cases, often being called on for his expertise and connections.
I truly love this series, and it has become my favorite, which says a lot because I am a series fanatic and have read dozens of series, inclluding several that have reached a high number of double digit titles. J.D. Robb/Nora Roberts is an exceptional author and I look forward and highly recommend each and every book in this series.
Many thanks to St. Martin's Press and to NetGalley for this ARC for review. This is my honest opinion.
ABOUT THE AUTHOR: