1934. Accidental amateur sleuth Kitty Underhay is being escorted by ex-army captain Matthew Bryant on an errand of mercy, as she takes a basket of grapes to her nemesis Mrs Craven, who is recuperating from a recent operation. But their arrival at Elm House Nursing Home coincides with the mysterious death of Lady Wellings, a long-term resident.

The woman was known to be ill, so when the police turn a disinterested ear to Mrs Craven’s suspicion that Lady Wellings was poisoned, Kitty decides to look into the case herself. And when another invalid, the gentle Mrs Pearson, collapses fatally in the breakfast room, it seems her suspicions are well-founded. For an institution promising health and rejuvenation, there seems to be a very low survival rate amongst the guests!

When the nurse Eloise Hibbert hints at sinister goings on among the staff, Kitty arranges to meet her away from the home to uncover how deep the treachery lies. However, before she can make the rendezvous, Eloise meets an unfortunate end falling from the top of the building. Was she pushed by the hand of fate, or a cold-blooded killer?

Meanwhile, Matt has been following an entirely different trail of evidence, and what he finds out chills him to the bone. When Kitty fails to return from her unsuccessful meeting, it is clear she has stumbled onto a plot far more devious than they could have imagined, and into a trap laid by an unscrupulous killer… 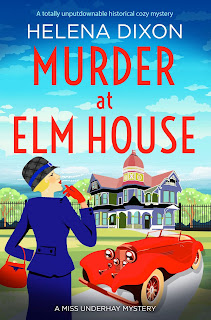 Title:   Murder at Elm House
Author:  Helena Dixon
Series:  Miss Underhay #6
Publisher:  Bookouture
Genre:   Cozy Mystery
Format:  Kindle ARC
No. of Pages:   234
Date of Publication:   June 4, 2021
My Rating:   4 Stars
No matter how much time Kitty would prefer to get the Dolphin Hotel up to speed, she is distracted yet again from other crimes. In this case there is another murder. Added to that is the fact that her good friend and love interest, Matt Bryant's house was nearly robbed, Kitty proves distracted.
Kitty's grandmother is more than concerned at Kitty facing danger more than once. Will Kitty leave the work of solving the current crimes to Matthew or will she investigate the crimes, proving her inate curiosity and skill when matters such as these are facing her.
Kitty's grandsmother's friend Mrs. Cravin is convalescing at Elm House and she is certain things are amiss. She asks Kitty and Matt for help as to sort out whatever could bw wrong. Whether direct questions towards Mrs. Craven, or due to insightful obsvertations, the pair prove more than adept as to working things out.
Per usual for Kitty, there are some people who do not like her questionss and interferrence, no matter how crafty she is in her investigatons. Suspicious activity is attempting to be hidden under a shroud of secrecy and lies. With an terrific pacing and engaging characters, including Kitty's grandmother and her maid, Dolly. this was a delightful cozy mystery that proves to be an excellent addition to an enjoyable series.
Msny thanks to Bookouture and to NetGalley for this ARC for review. This is my honest opinion.
ABOUT THE AUTHOR: 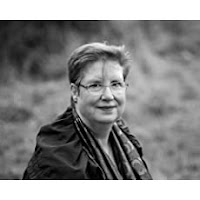