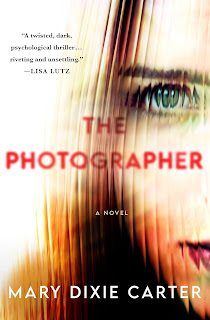 Title:    The Photographer
Author:  Mary Dixie Carter
Publisher:  Celadon Books
Genre:   Mystery/Thrillers
Format:  Print ARC
No. of Pages:   288
Date of Publication:   May 25, 2021
My Rating:   5 Stars
DESCRIPTION:
Mary Dixie Carter's The Photographer is a slyly observed, suspenseful story of envy and obsession, told in the mesmerizing, irresistible voice of a character who will make you doubt that seeing is ever believing.
WHEN PERFECT IMAGES
As a photographer, Delta Dawn observes the seemingly perfect lives of New York City’s elite: snapping photos of their children’s birthday parties, transforming images of stiff hugs and tearstained faces into visions of pure joy, and creating moments these parents long for.
ARE MADE OF BEAUTIFUL LIES
But when Delta is hired for Natalie Straub’s eleventh birthday, she finds herself wishing she wasn’t behind the lens but a part of the scene―in the Straub family’s gorgeous home and elegant life.
THE TRUTH WILL BE EXPOSED
That’s when Delta puts her plan in place, by babysitting for Natalie; befriending her mother, Amelia; finding chances to listen to her father, Fritz. Soon she’s bathing in the master bathtub, drinking their expensive wine, and eyeing the beautifully finished garden apartment in their townhouse. It seems she can never get close enough, until she discovers that photos aren’t all she can manipulate.
Link to purchase the book
MY THOUGHTS:
Envy and obsession are powerful players in this thrilling story by Mary Dixie Carter. Delta Dawn has a wonderful job. As a photographer, children are often the focus of her talent, and she truly excels when it comes to creating memories for families. However, when she is hired to photograph Natalie Straub's birthday party, Delta begins to have strange ideas. She wonders why she is always on the outside looking in. What if she wasn't behind the lens, instead part of the very scenes she is photographing? The Straub's have an idyllic life of wealth and elegance, and Delta becomes obsessed.
As I became immersed in this story I could not help but think of You by Caroline Kepnes. Although I only read the first book in the series, and have not watched the television show, Joe Goldberg was front and center in my mind as I read this book, The Photographer. It has been three years since I read You, and I hadn't even tracked it on Goodreads. Nonetheless, despite close to two thousand books read since then I remember Kepnes's book almost verbatim.
Why the comparison? What is it about Delta? I think it was privilege. She felt she deserved the life of the Straub family. She lays out a plan of attack, as it were, to instill herself into their lives. This begins by offering to babysit. Then she befriends Amelia, Natalie's mother. This leads to fantasizing about Fritz, Natalie's father. Factor in her excellent skills as a photographer, and she even maniuplates photos to appear as if she has been part of their life's events, including imagining herself with Fritz at the most basest of levels.
Delta's imagination and obsession reaches no bounds. Soon she decides to insert herself into the Straub family, even if that means literally erasing Amelia. In fact, Delta was not the only intriguing and off-balance character. Amelia was no peach in this story. Both of the women had a level of creepiness, leaving me to wonder who indeed would end up on top and where things could possibly land.
Lastly, although Natalie was only eleven years old, she had a few things that were not just right as well. Mary Dixie Carter did a great job at writing characters we the reader could hardly warm up to. Instead, we were pretty much groomed to dislike all of them, for their own reasons, all while leaving me to turn pages vigoroursly as I just had to see this book to its conclusion. No worries there. I was engaged, intrigued and shocked.
Many thanks to Celadon Books and to NetGalley for this ARC for review. This is my honest opinion.

Mary Dixie Carter’s debut novel The Photographer will be published in May 2021 by Minotaur Books - St. Martin’s Publishing Group in the US and by Hodder & Stoughton in the UK.
Mary Dixie’s writing has appeared in TIME,  The Economist, the San Francisco Chronicle, the Chicago Tribune,  The Philadelphia Inquirer,  The New York Sun, The New York Observer and other print and online publications.  She worked at The Observer for five years, where she served as the publishing director.  In addition to writing, she also has a background as a professional actor.
Mary Dixie graduated from Harvard College with an honors degree in English Literature and holds an MFA in Creative Writing from The New School.  She lives in Brooklyn with her husband and two young children.
web | facebook | twitter | instagram