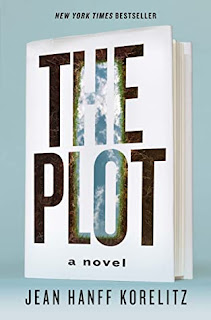 Title:   The Plot
Author:  Jean Hanff Korelitz
Publisher:  Celadon Books
Genre:   Mystery/Thrillers
Format:  Audiobook and Print ARC
No. of Pages:   336
Date of Publication:   May 11, 2021
My Rating:   4 Stars
DESCRIPTION:
Jacob Finch Bonner was once a promising young novelist with a respectably published first book. Today, he's teaching in a third-rate MFA program and struggling to maintain what's left of his self-respect; he hasn't written--let alone published--anything decent in years. When Evan Parker, his most arrogant student, announces he doesn't need Jake's help because the plot of his book in progress is a sure thing, Jake is prepared to dismiss the boast as typical amateur narcissism. But then . . . he hears the plot.
Jake returns to the downward trajectory of his own career and braces himself for the supernova publication of Evan Parker's first novel: but it never comes. When he discovers that his former student has died, presumably without ever completing his book, Jake does what any self-respecting writer would do with a story like that--a story that absolutely needs to be told.
In a few short years, all of Evan Parker's predictions have come true, but Jake is the author enjoying the wave. He is wealthy, famous, praised and read all over the world. But at the height of his glorious new life, an e-mail arrives, the first salvo in a terrifying, anonymous campaign: You are a thief, it says.
As Jake struggles to understand his antagonist and hide the truth from his readers and his publishers, he begins to learn more about his late student, and what he discovers both amazes and terrifies him. Who was Evan Parker, and how did he get the idea for his "sure thing" of a novel? What is the real story behind the plot, and who stole it from whom?
Hailed as breathtakingly suspenseful, Jean Hanff Korelitz's The Plot is a propulsive read about a story too good not to steal, and the writer who steals it.
Link to purchase the book
MY THOUGHTS:
Jacob Finch Bonner was a well respected novelist after just one book. However, for his sophomore title, he is hit with a hard case of writer's block. To make ends meet, he is teaching a program for aspiring writers, although it has been years since he has published. When someone taking the class, Evan Parker, tells Jacob of a plot for a book, Jacob is intrigued. Then, Jacob discovers that Evan has died, so Jacob takes on Evan's plot as his own and writes a bestselling book. The book has done so good that Jacob rises immediately to the top - including an offer from Stephen Spielberg for a feature film. He is a book thief, but who's to know?
Now, wealthy beyond belief, traveling far and wide, Jacob's success almost comes to a screeching halt - and it starts with a single email - You are a thief. That is all it says. Jacob perhaps should have given the idea of Evan's plot some serious thought. Actually, Evan felt it was a sure thing. If Evan had not died, would he have achieved the very success that Jacob is experiencing?
Who knows of Jacob's actions? Jacob now starts to dig deeper into Evan's life. Now he needs to know how Evan came up with the plot, and whether or not it had anything to do with his death. What was the plot based on, who was really behind it and who is sure to expose Jacob?
That one email becomes many. Then there are the texts. But, it doesn't stop there. Threats are coming fast and hard, giving Jacob pause. However, the train has left the station and Jacob can do no less than to try and sort things out so that he never becomes exposed.
Although I loved this thrilling story, there was a point I pretty much figured it out. Even though that part of the mystery fell flat, I was eager to see the journey ahead of Jacob so that the many questions and fears facing him would be resolved. The book definitely was intriguing, enough that I pretty much read it from cover to cover in one sitting. Having an idea who was threatening Jacob did not take away my enjoyment of the story. In fact, what it did was to keep me even more riveted to the events as they unfolded. I ended up loving this book and have already recommended it countless times.

Although I received a print ARC of The Plot, I also got an audiobook review copy. I did have to speed up the book in order to feel a bit more engaged with the story. This is not the first time I have listened to this narrator. In fact, two of the books I have listened to were Gone Girl and The Wife Upstairs. Once I got deeper into the story, I was able to relax into the narration, and thus also have been recommending the audiobook to fellow readers.
Many thanks to Celadon Books and NetGalley for this ARC for review.  This is my honest opinion. 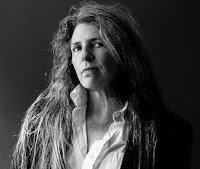 Jean Hanff Korelitz was born and raised in New York City and educated at Dartmouth College and Clare College, Cambridge. She is the author of the novels: The Plot,  You Should Have Known (Adapted for HBO as “The Undoing” by David E. Kelley, directed by Susanne Bier and starring Nicole Kidman, Hugh Grant and Donald Sutherland), Admission (adapted as the 2013 film of the same name, starring Tina Fey, Lily Tomlin and Paul Rudd), The Devil and Webster, The White Rose, The Sabbathday River and A Jury of Her Peers, as well as a middle-grade reader, Interference Powder, and a collection of poetry, The Properties of Breath. A new novel, The Latecomer, will be published by Celadon Books in 2022.
With her husband, Irish poet Paul Muldoon, she adapted James Joyce’s “The Dead” as an immersive theatrical event, THE DEAD, 1904. The play was produced by Dot Dot Productions, LLC, for the Irish Repertory Theatre and performed at New York's American Irish Historical Society for seven week runs in 2016, 2017, and 2018.
Korelitz is the founder of BOOKTHEWRITER, a New York City based service that offers "Pop-Up Book Groups" where readers can discuss books with their authors. Events are being held online for the duration of the Coronavirus Pandemic.
She and Paul Muldoon are the parents of two children and live in New York City.
web | twitter