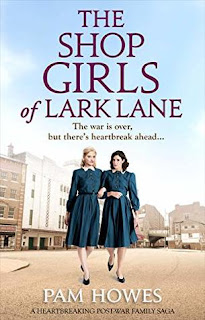 DESCRIPTION:
The war is over, but there’s heartbreak ahead…

Liverpool, 1945. As the war draws to a close, Alice and Terry Lomax are building a new life with their young daughter Cathy. After years away fighting, Terry is a stranger to his daughter and must work hard to win her trust and love.

Alice and old friend Sadie work in the haberdashery of Lewis’s department store, where bomb damage scars the walls and rationing is still in force. Yet Lewis’s remains open, a sign of strength in the midst of Liverpool’s post-war ruins.

Though memories of those lost in the war are fresh, Alice and Sadie look forward to the future. But then a tragic accident leaves Alice a widow, and the father of Sadie’s child – a man she hoped never to see again – is back in Liverpool…

With Alice struggling to start again alone, and Sadie desperate to protect her son, can these two shop girls overcome their troubles and keep their hopes alive – even with all the odds against them?

1945 Liverpool is met with the end of World War II, so things like air raid sirens, falling planes, food rations, and the like, are now becoming things of the past. In the first book in the series, The Factory Girls of Lark Lane, we met Alice Lomax, Sadie Romano and Millie Markham, women that worked in a munitions factory in 1940 Liverpool. Now, with the war over, Alice and Terry have a chance of setting up a home with young Cathy. Terry is struggling to learn how to get to know his young daughter. For now, Alice and Sadie are working hard in a haberdashery shop. Sadie is raising young son Gianni and she is estranged from her husband Luca.

Things start looking up for Alice and her little family, however, she is beset by unspeakable tragedy. Her husband Terry, after surviving the horrors of war, loses his life in a tragic accident. Now Alice is alone. Sadie thought she was alone too, but Gianni's father is back, and she is none too pleased. He lives a life she doesn't find conducive to raising a family. Both women must forge ahead and do so without ever giving up hope. As Millie has already found the love of her life, she plays a very small role in this story, The Shop Girls of Lark Lane.

Just as in the first book in this series, these women must cope with challenges. While reading this story, I couldn't help but shed more than a few tears when Alice lost Terry. It also broke my heart that Alice may have felt that she couldn't raise Cathy alone, as well as her brother, Brian, and allowed Terry's friend, Jack Dawson, come into her life. A lot of writing on the wall was not necessary to see that Jack was a walking disaster. All we wanted at this point was for Alice to find peace and joy. Involving herself with a man who drank far too much, well, it didn't seem that it could lead to much.

I must admit to reading this Lark Lane series out of order. Last year I read the first book, and I just completed the third, The Nurses of Lark Lane. Although I have already written that review, I elected to stop and read this book and publish this review first. I do think each story could indeed do well as standalones. However, the stories are so very well-connected, with remarkable growth with all of the characters, that I recommend readers and lovers of continuity to read the series in order. As it stands, this book will definitely leave readers eager to continue the series.

Pam Howes touches on some sensitive issues in this book, especially with Jack and his abominable behavior. The way he treats Alice and Cathy was just horrible and rather painful to read. Although the book works hard at showcasing the strength that Alice has, her reasons for marrying Jack gave me pause. However, her family and friendships never left her without hope. Despite my feeling sad more than once, I feel this is a very important series and I am both honored and thrilled to have read it.