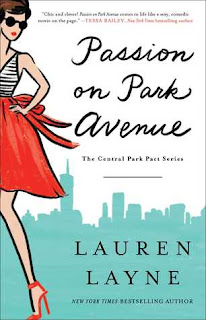 From the author of the New York Times bestselling Stiletto and Oxford series, the first in a sizzling new series following the unlikely friendship of three Upper East Side women as they struggle to achieve their dreams and find true love and happiness in the city that never sleeps.

For as long as she can remember, Bronx-born Naomi Powell has had one goal: to prove her worth among the Upper East Side elite—the same people for which her mom worked as a housekeeper. Now, as the strongminded, sassy CEO of one of the biggest jewelry empires in the country, Naomi finally has exactly what she wants—but it’s going to take more than just the right address to make Manhattan’s upper class stop treating her like an outsider.

The worst offender is her new neighbor, Oliver Cunningham—the grown son of the very family Naomi’s mother used to work for. Oliver used to torment Naomi when they were children, and as a ridiculously attractive adult, he’s tormenting her in entirely different ways. Now they find themselves engaged in a battle-of-wills that will either consume or destroy them…


Filled with charm and heart and plenty of sex and snark, this entertaining series will hook you from the very first page.
Link to purchase the book

Naomi Powell, Claire Hayes and Audrey Tate meet at the funeral of a man they were all involved with at the same time, and however unlikely, they became fast friends. In the first book of the Central Park Pact series, Naomi's story is told. Naomi's telling story is that she grew up poor and her mother was a housekeeper. At one of the homes her mother worked for, she lost her job and they were thrown out. Before this happened, Naomi was all but bullied by the family's son.

When Naomi gets an exclusive apartment in the Upper East Side of New York, she still feels like an outsider. She feels uncomfortable around her new neighbors, but especially Oliver Cunningham. There is a very good reason behind her feeling strange around Oliver. He is the grown son of one of her mother's ex-employees. As Oliver tormented her as a child, he especially does so now. However, this is for entirely different reasons. For one thing, he is entirely too attractive. Meanwhile, meeting up with Oliver's father brings a lot of angst to Naomi, but for very good reason she is forced to adjust her view of the older man.

Naomi has made great strides as an adult. She is now the CEO of an accessory company and has more more to spend in several lifetimes. She certainly can choose whatever path she wants in life. Oliver is an architect and is very successful. They are a fine pair, even if their past - and now their present - clash.

Passion to Park Avenue is a a warm, sensitive and compelling read. Watching Oliver and Naomi find their way to love was quite enjoyable. This story is much tamer than Lauren Layne's 21 Wall Street series. What it lacks in spice it truly makes up when it comes to being quite an emotional read, especially when it comes to Oliver's father. I look forward to reading the other two books in the series, Love on Lexington Avenue, due in September, and Marriage on Madison Avenue, publication date TBA.

Many thanks to Galley and to NetGalley for this ARC to review in exchange for my honest opinion.