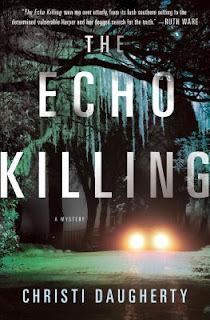 DESCRIPTION:
When a murder echoing a fifteen-year-old cold case rocks the Southern town of Savannah, crime reporter Harper McClain risks everything to find the identity of this calculated killer.

A city of antebellum architecture, picturesque parks, and cobblestone streets, Savannah moves at a graceful pace. But for Harper McClain, the timeless beauty and culture that distinguishes her home’s Southern heritage vanishes during the dark and dangerous nights. She wouldn’t have it any other way. Not even finding her mother brutally murdered in their home when she was twelve has made her love Savannah any less.

Her mother’s killer was never found, and that unsolved murder left Harper with an obsession that drove her to become one of the best crime reporters in the state of Georgia. She spends her nights with the police, searching for criminals. Her latest investigation takes her to the scene of a homicide where the details are hauntingly familiar: a young girl being led from the scene by a detective, a female victim naked and stabbed multiple times in the kitchen, and no traces of any evidence pointing towards a suspect.

Harper has seen all of this before in her own life. The similarities between the murder of Marie Whitney and her own mother’s death lead her to believe they’re both victims of the same killer. At last, she has the chance to find the murderer who’s eluded justice for fifteen years and make sure another little girl isn’t forever haunted by a senseless act of violence―even if it puts Harper in the killer’s cross-hairs…

Harper McClain has a busy job as a crime reporter who works very closely with the police. As beautiful as her environment is in stunning Savannah, Georgia, it is that very beauty that Harper sees very little of. What she sees is the deep, dark life that exists as some of the city's residents commit gruesome crimes. She is the survivor of one such crime. It was Harper herself who discovered the broken body of her brutally murdered mother. A murder that was never solved.

Harper's search for the identify of her mother's killer has led her to be the very best in her field. Even if she wanted to put her past behind her, it is truly impossible. Well, one night, while with the police during the investigation and her reporting at the scene of a violent homicide, Harper cannot help but get the eerie sense that the murder now and that of her mother are nearly identical -- down to a young girl, a survivor, being led away from the police. Oh, just too familiar.

Defying her boss - and the police - Harper begins digging deeply. She also digs back to her own past, even delving into records she has no access to. It may have been fifteen years for Harper, but the memories are all too vivid, and thanks in large part to the current case. No doubt things become quite dangerous for Harper. It will be any wonder if she manages to get away safe.

The Echo Killing is a fast-paced, suspense filled story and is a great start to a new series. The next book in the series, A Beautiful Corpse, was another fantastic read.