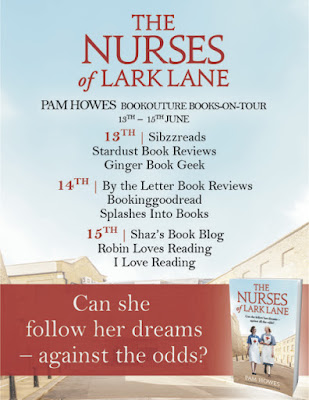 Today is my day for the Blog Tour for The Nurses of Lark Lane by Pam Howes.


ABOUT THE BOOK:
Can she follow her dreams – against all the odds?

Liverpool, 1955. With her abusive husband drinking all her wages, Alice faces a daily struggle to provide for her family. Her eldest daughter Cathy has always longed to be a nurse, but when the family’s poverty means she’s forced to leave school and get a job – without the qualifications she needs – it looks like her dreams are over.

But Cathy isn’t willing to give up without a fight, and with the support of old friend – and new love – Gianni, she manages to secure a place as a cadet nurse, learning as she works.

Cathy knows that without her around, her mam must stand up to her violent husband alone – and that with less money coming in, Alice will be in danger of losing everything. What’s more, since nursing students must be unmarried, and Gianni is desperate to settle down, it’s not just her mam who hopes that Cathy will come home…

Can Cathy find a way to have it all, or will becoming a nurse mean leaving her family – and love – behind her?

The Nurses of Lark Lane is a heart-breaking saga about a family’s battle to survive. If you love Nadine Dorries, Diney Costeloe and Donna Douglas, you won’t want to miss Pam Howes!

An earlier version of this book was previously published as Cathy’s Clown. This edition contains significant editorial revisions. 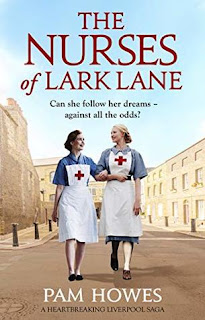 Readers of the Lark Lane series, set in 1940s and 1950s Liverpool, have had the touching experience of following Alice through the years. Alice is now the mother of teen-aged Cathy and two younger girls. She is married to Jack now and has recently returned home due to being injured. Jack, was trouble through and through. Either it was womanizing or alcohol. What is worse was his abuse towards Alice, and that fact presented danger to Cathy. All of this played a role in his not living in the household.

Cathy wants to become a nurse. Doing so will not make things easy for Alice, as Alice is suffering horribly. But Cathy has a chance, and it is a chance she feels she must take. Meanwhile, she is drawn to Gianni, the son of Alice's friend Sadie. They grew up together, and now she is sensing something different about him. To be such a young man, Gianni has a lot to offer Cathy and I hoped from the very beginning that he would be good for her.

I love Cathy's story. Her love for Gianni - and nursing - allowed her to rise above some extreme difficulties. Because Jack was never far away, however, I sometimes worried that Cathy might not be okay. This book was so good, so engrossing, that I read it in two sittings, in just a few hours. The drama was all-encompassing as the story went from incredible sadness to such wonderful hope. There were some disturbing moments in this book when it came to Jack. He was a despicable man and reading of his actions caused much pain.

There is a lot of story here. I found it to be well-paced, and quite fluid. I read the first in the series, The Factory Girls of Lark Lane, about a year ago and I adored it. I had to go back and read the second in the series, The Shop Girls of Lark Lane. The way Pam Howes draws readers into the lives of all of these women is nothing short of exceptional. As this is primarily Cathy's story, it could do quite well as a standalone, but I felt that I needed that sense of continuity that I have become so accustomed to in order to get the full effect. No worries; these were hours very well spent. I definitely look forward to reading more by this wonderful author, and certainly hope that there will be at least one more Lark Lane story to come. I am sure the expectation will be well worth it.