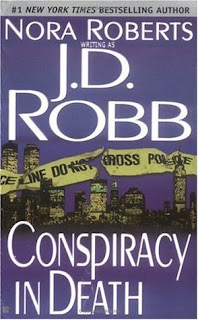 Streetwise cop Eve Dallas and her trusty sidekick Peabody face a methodical killer in this latest addition to the In Death series by J.D. Robb, better known as the bestselling author Nora Roberts. In the late 21st century, on the streets of New York City, a street sleeper is found murdered, his diseased heart removed with surgical precision. His death would typically drop to the bottom of a list of senseless and inexplicable killings, but Lieutenant Dallas, who "would stand for the dead and the living," is not about to let that happen. When her research uncovers similar crimes in several cities that were dropped under mysterious circumstances, Dallas knows she's facing a killer cruel enough to prey on the weakest in society and powerful enough to conspire an extensive coverup. To complicate matters further, Dallas faces an equally troubling threat to her career when she's linked to the death of a fellow cop. Now she must fight to restore her good name as well as track down the killer.

In Conspiracy in Death, Roberts creates a futuristic world of evil that Eve Dallas negotiates through tough talk and brute force. While Robb crafts the crimes with great care, she assumes a familiarity with the characters that new readers will lack. But fans of the In Death series and newcomers alike will enjoy the thrill of the chase as Eve Dallas sets out to get her man.

Lieutenant Eve Dallas, and one of her officers Peobody have a new case. When they find a homeless person murdered with his heart removed, she finds that it is not just another random murder. The heart was removed with excellent precision, so Eve knows that this is not a run of the mill streeet killing. As Eve begins her investigation, she realizes that there were other killings in other cities with the same type of method, organs being removed with excellent detail. All of the victims were down and out.

While on the case, Eve has a run in with another cop. When that very cop turns up dead, Eve finds very career is threatened. Not only does Eve have to find the serial killer, she must get to the bottom of what happened to the cop, all while striving to get her good name and reputation restored.

I found this next book in the In Death series to be a bit more potent than the others that preceded this one. It was very tense throughout, even with Eve's sensitive and touching interchanges with gorgeous husband Roarke. No matter how their love was affirmed, Eve's past and present created problems that seemed impossible to overcome. The entire process that Eve experienced in this book hit me harder than any so far.

I was on the edge of my seat with this one. The futuristic aspect of this book went a bit further than others in this series, so that was a real bonus. I am ecstatic to get to the next book in the series, Loyalty in Death. There are 50 books in the series to-date.