I am thrilled to be a part of the amazing Blog Tour for Jackson by Emily March. Included is the book description, excerpt and review.

Sometimes it takes a new beginning
Caroline Carruthers thinks she buried her dreams along with the love of her life…until a stranger named Celeste dares her to chase a dream all on her own. Moving to Redemption, Texas, is chapter one in Caroline’s new life story. Opening a bookstore is the next. Finding love is the last thing on her mind as she settles into this new place called home. But when she meets a handsome, soulful man who’s also starting over, all bets are off.

to reach a happily-ever-after
Jackson McBride came to Redemption looking only to find himself, not someone to love. Ever since his marriage ended, he’s been bitter. Sure, he used to believe in love—he even has the old song lyrics to prove it—but the Jackson of today is all business. That is, until a beautiful young widow who’s moved to town inspires a change of heart. Could it be that the myth of Redemption’s healing magic is true…and Jackson and Caroline can find a second chance at a happy ending after all? 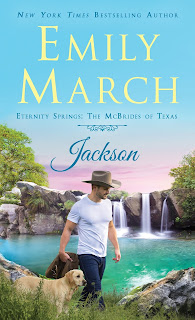 Caroline Carruthers is doing some work in a town called Redemption. While there she gets terrible news about her husband and has to return home. Before she gets that phone call she meets Jackson McBride. The two strike up a strong friendship. While it is true that they had sparks, Caroline is devoted to her ailing husband.

Jackson is home in Redemption because he and his cousins have inherited property. Jackson has a chance to make something of his life. This is especially important to him because he is now divorced and has very little visitation with his daughter. He was a very successful songwriter but has lost the ability to write music. Rebuilding a ranch with his cousins may not have been his dream in life, but it could be truly fulfilling for him.

Jackson was really hurt when his ex, who is quite a famous singer, cost him everything. So when he is drawn to Caroline, it is rather a relief that she is married. He certainly is not looking for love. While learning about Redemption, while Jackson is planning his future, he and Caroline spend a bit of time together. Due the sad news Caroline received, Jackson makes sure she gets home safe and he then plans on getting his life started. All of this is in Part One of the story, which sets a fine basis for a warm, engaging read.

Quite honestly, several things change during the course of this story. For starters, Caroline suffers a great loss and decides to return to Redemption to live. Meanwhile, Jackson has been working on finding ways to spend more time with his daughter. He also is looking for that missing magic in his life, the magic that made him a creative song-writer.

Lines were never crossed with Jackson and Caroline. Their brief friendship slowly begins to turn into something more. It was refreshing, however, to see Caroline's honesty about her feelings in her previous marriage. Being a widow isn't easy, especially in the case where she genuinely loved her husband. Jackson is still dealing with baggage from his marriage. So, things progressed for Jackson and Caroline at a very nice pace.

Jackson is rich with characters from the previous series, but it offers a fresh face, Haley, Jackson's six-year-old daughter. I loved her in this book and I think her addition to the story added quite a nice layer. Another thing that made this story refreshing - and a bit frustrating - was Jackson's songwriting and what motivated him. But, it was handled with aplomb and kept me drawn to the story. There were some very touching scenes in this book and I literally could not put it down.

Jackson is the first book in a new series by Emily March. It is a spinoff of the long running Eternity Springs series. I do wish that I read at least part of the first series, because of some of the characters that appeared in this book. However, this is Jackson and Caroline's story and it read quite well as a standalone. I look forward to reading the other two books in this trilogy.

Emily March is the New York Times and USA Today bestselling author of the heartwarming Eternity Springs series. A graduate of Texas A&M University, Emily is an avid fan of Aggie sports and her recipe for jalapeño relish has made her a tailgating legend.